56-year-old White opened the one-day tournament with a 4-1 win against dangerous qualifier Jonathan Bagley. Returning for the evening session he then eliminated career-long adversary Stephen Hendry by the same scoreline in the semi-finals, fashioning a 70 break in the process. A few hours previously seven-times world champion Hendry had ousted Joe Johnson, 4-3.

White’s opponent in the final was Jersey based Aaron Canavan, the reigning world seniors champion. Canavan’s bid for a second world title inside the space of twelve months began positively as he dispatched the returning Tony Drago, 4-1. In the last four he faced pre-tournament favourite Ken Doherty, who had earlier recovered to see off Northern Irish wildcard Patrick Wallace, 4-2.

There was never more than a frame between the pair and the match duly went to a deciding frame. Doherty was poised to advance when he led by 27 points, but the Irishman missed a tricky red along the top cushion that would have left his counterpart needing snookers. In an exciting finish, Canavan took advantage of the error and coolly cleared with a break of 30 to book his berth in the championship match.

The final was a nervy affair as both players struggled to take control. White claimed the opener when he capitalised from an in-off by Canavan, eventually back-doubling the pink for the frame. However, Canavan got a foothold when he crafted a 46 break to square it, and after both players had made small contributions in frame three, it was the amateur’s turn to steal one on the pink.

Canavan then had a glorious chance in frame four to extend his lead and move one away from glory, but an unexpected miss on the brown allowed White to pounce and level it at 2-2.

Whilst there would be plenty more drama to come, Canavan’s failed conversion felt like a momentum shifter. Aided by several impressive single-ball pots, it was White who came through a post-midnight climax as a 4-2 victor and later lifted the Dennis Taylor Trophy. 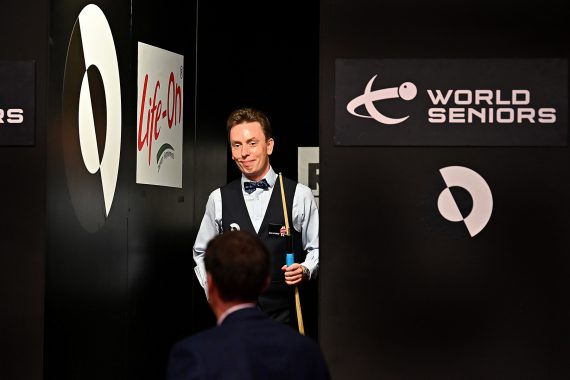