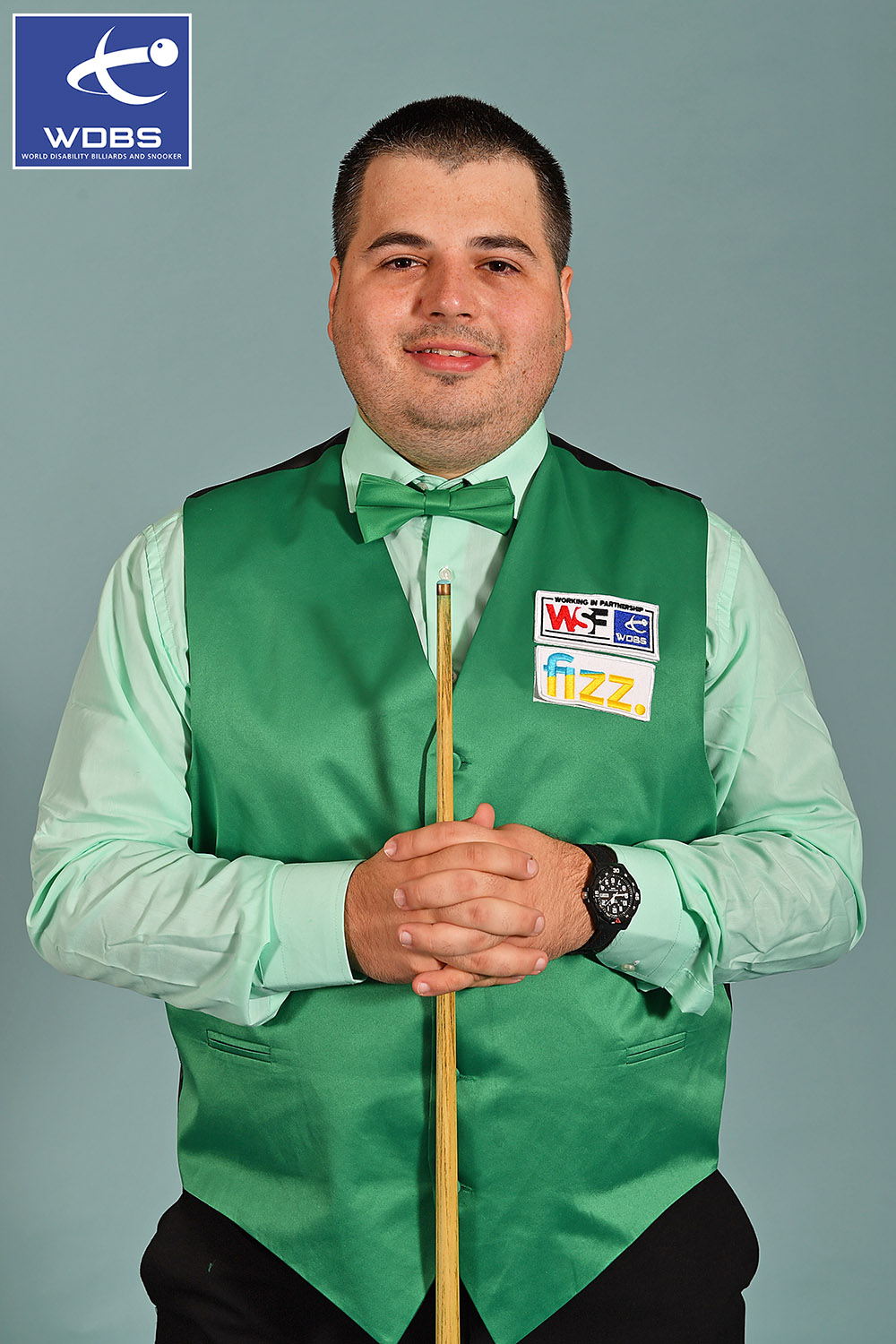 Hi Christopher, how have you found the past six months during these most unusual times?

I have found it a struggle, as my routine of playing snooker a few times a week was disrupted because of the whole thing. This pandemic has caused issues for a lot of people, I’m no exception. Because I like routines, this has taken a huge hit on me as everything has stopped for now and trying to adjust to unpredictability is difficult for me.

Have you been able to play snooker during this period of lockdowns and restrictions?

Yes I have. Only the past three months I have been able to pick up my cue. I was able to go to my local club of a Friday evening to practice. I also had some coaching sessions with my coach as he wanted to pick up the sessions again. So that was another avenue of practice to keep me on top of my game.

You enjoyed a memorable debut at the 2019 Southern Classic in Swindon, almost defeating our multiple champion Leroy Williams in the final. What do you remember from the weekend and what encouraged you to enter the event?

I remember Swindon being a very interesting place. On the way there, dad and I were talking about Swindon’s magic roundabout. On the table I was going into the event with an open mind to have a good time. I still remember beating Peter on the final black in the final frame to get through to the final and doing well at the start of that final.

I heard about the WDBS when it was first launched and thinking ‘oh sweet something that I could take part in’ but I found out that there was not a group for me at the time. It was when my family and I were talking about snooker at the dinner table when I decided to check up on the classification section only to find that there was a group 6B specifically for people under the ASD. We rang the organisation the next day about taking part and the next thing you know I made my debut in Swindon. 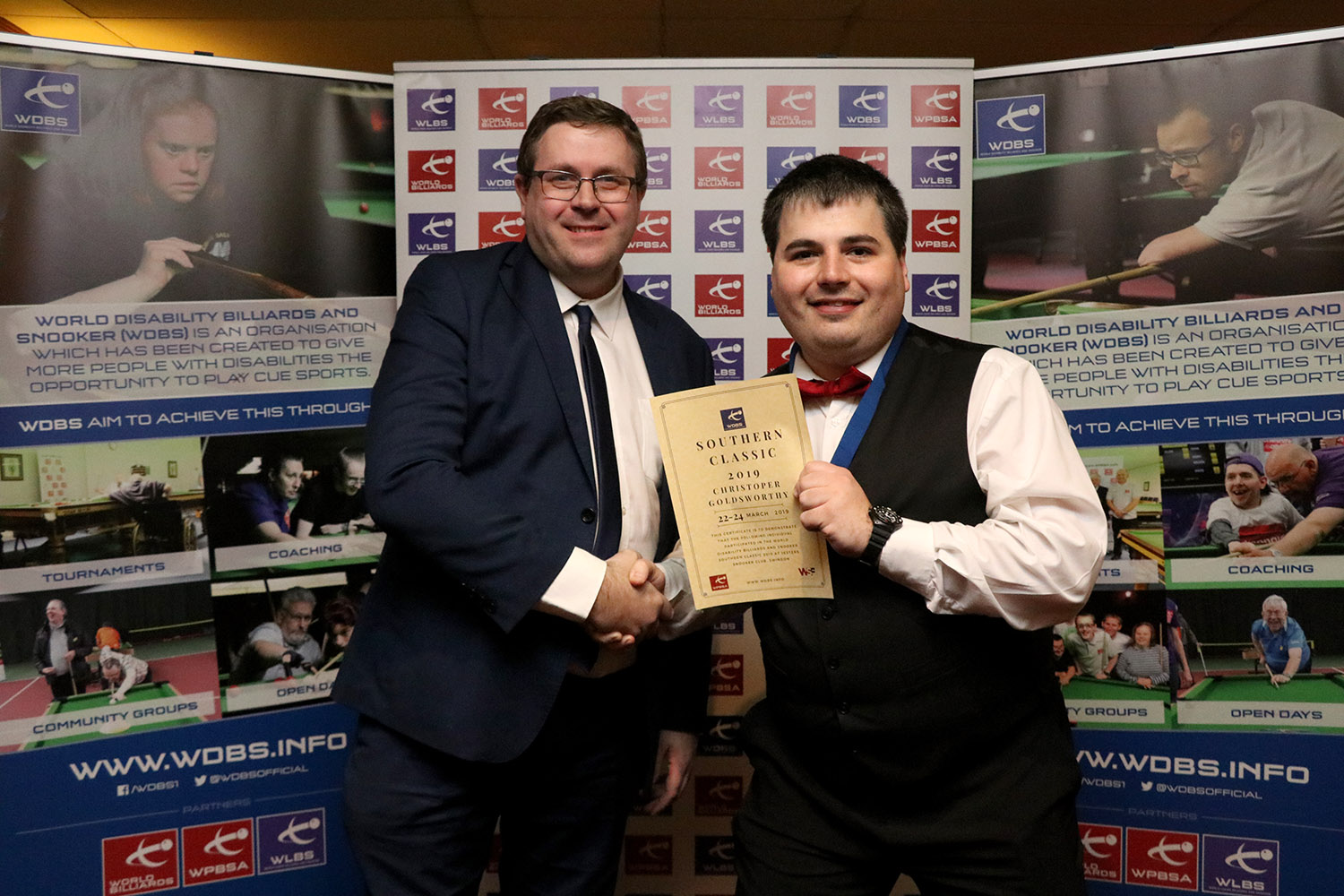 What has been your impression of the WDBS Tour and how much have you enjoyed the competition?

I’m impressed by how the WDBS is run, the open days are well set out and offer people an opportunity to play with coaches there for advice and support. I’ve got some good experience out of this and I’m very happy about that.

I’ve enjoyed the competitions, especially the Welsh Open where you can play a range of different people with disabilities and get to know them.

You played in your first non-UK event earlier this season at the Belgian Open, winning the Challenge Cup. How much did you enjoy the weekend?

It was my first time outside of UK soil, so it was a different experience for me. I had a really good time with my dad, I was apprehensive in going because I’ve never been abroad before, but I got comfortable as the tournament went on. Looking back now I did have a very good time. A picture of me and dad standing behind a banner was taken and I think that amused some people there. 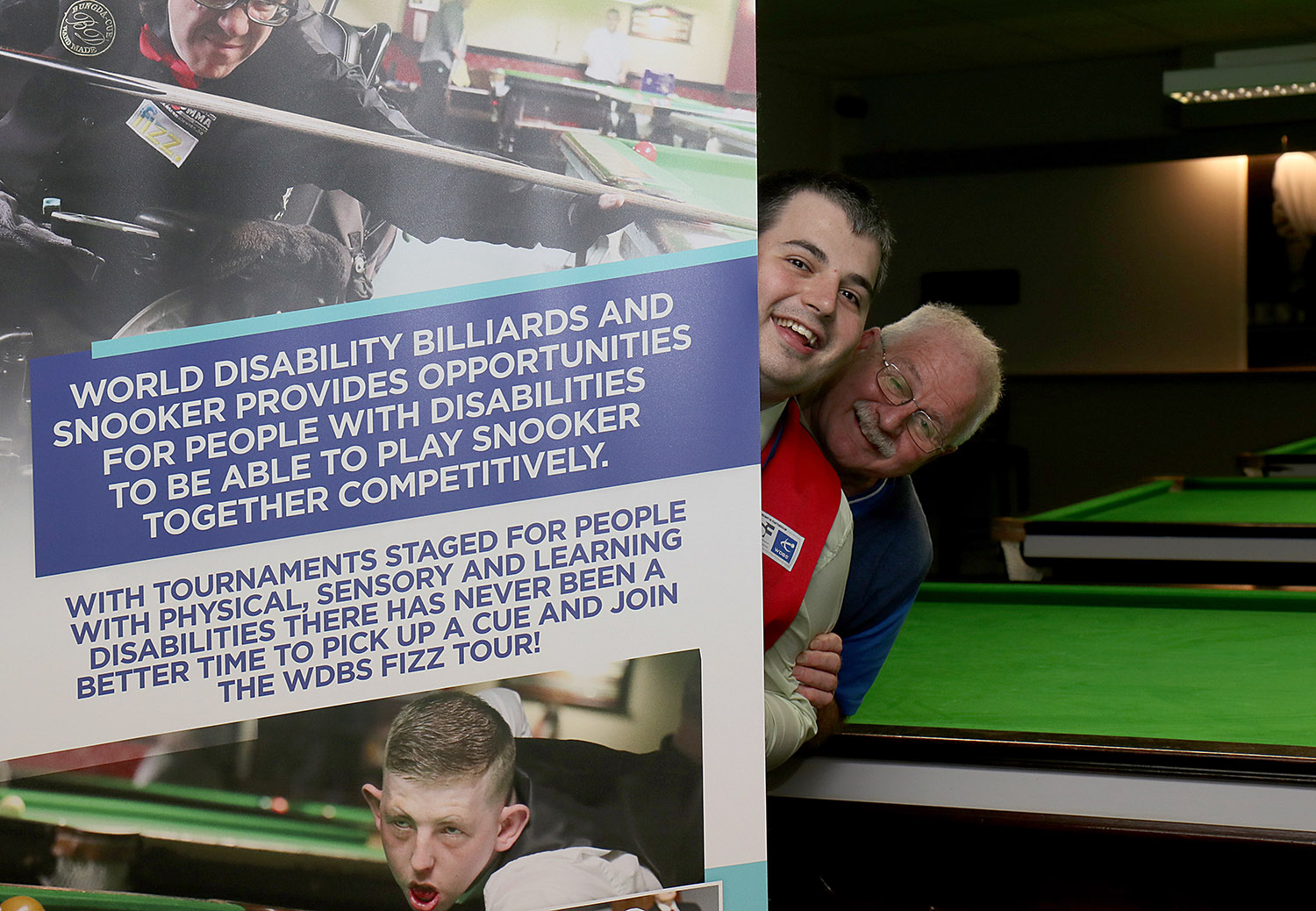 You always come to your tournaments with your dad, how supportive has he been of your snooker?

My dad is my number one fan. My dad loves snooker as well and is very proud of me competing at this level. My dad also likes talking with other snooker players and their parents/cares as they share their experiences of their children with disabilities. My mum would love to come and support but she gets nervous when I’m playing.

How impressed are you by the standard of players on the WDBS circuit?

I’ve been impressed by the standards and styles of the other players. When I joined I had an open mind on how other people play with their disabilities. There are some good snooker players and I am impressed at their standards and it’s a challenge for me to try and beat them.

How does Autism affect your snooker and are there any particular challenges at events that we do not see from the outside?

With my Autism I struggle with change. For example if I am told I’m playing at a certain time and then it is changed last minute, my anxiety levels rise and I get stressed over the change. I want my mind to stay focused on the game of snooker but with my Autism the anxiety/stress levels get to me when I know it should not but it is difficult to handle at times. 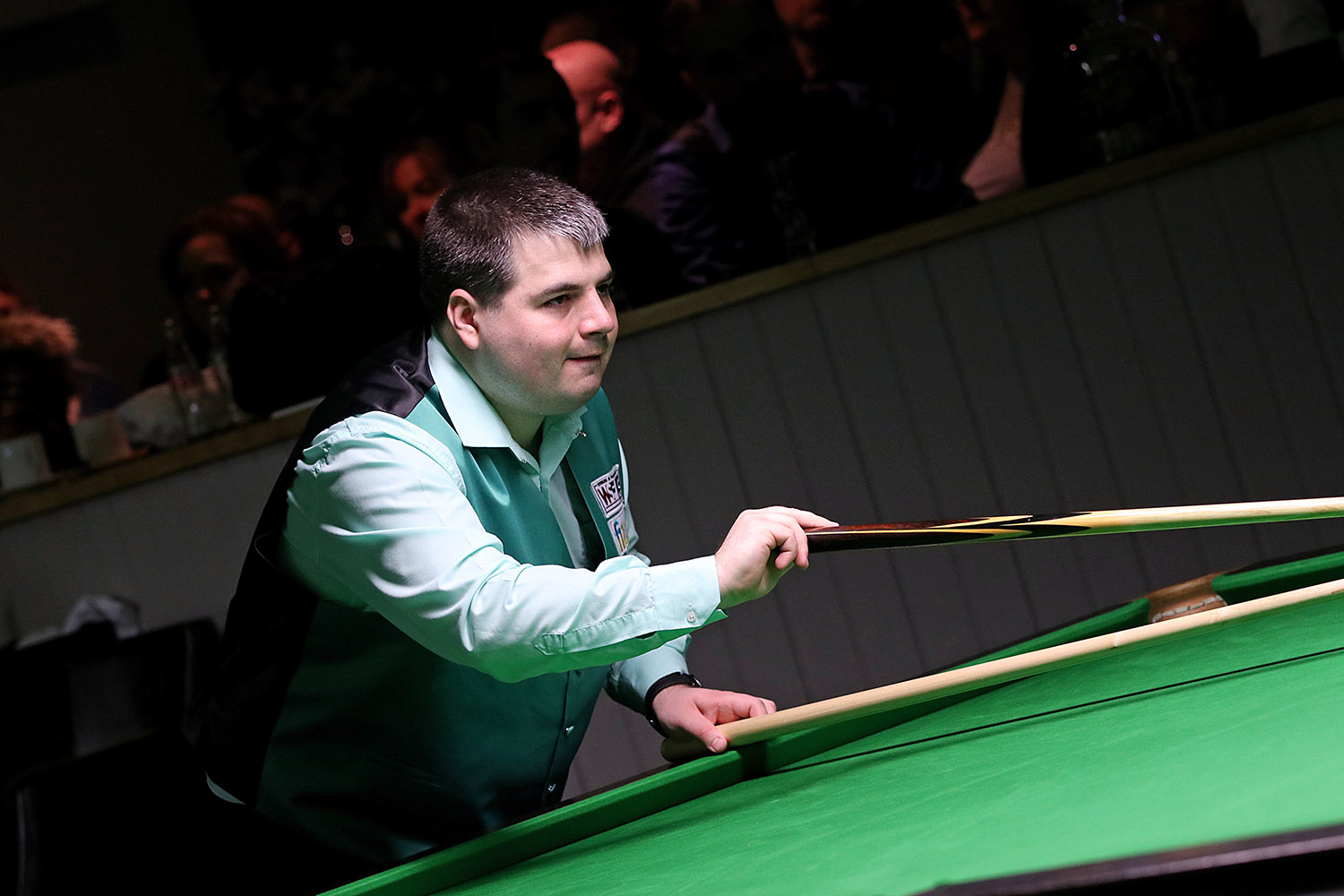 When I was younger, I always had an interest in individual sports, snooker and bowling for example. With snooker I can focus on my game and myself without and distractions from others which I feel that team games can be susceptible at times with teamwork.

At the age of ten I had an interest in snooker and one of my family members friends gave me a snooker cue that was used by her husband. Near two decades on and I’m still playing snooker using the cue to this day.

What are your biggest snooker achievements so far?

I won a few competitions in a now defunct local league, at the end of their seasons they would do a team knockout. One season our team didn’t do so well but we had good momentum in the knockout to with that competition. During the last season it was running I ended up winning both the singles handicap and singles scratch competitions, I also got a trophy for highest win ratio in the league that season as well.

For WDBS I came second twice (including my debut), and won the challenge cup in Belgium, hopefully I can take that victory to win more in WDBS competitions. 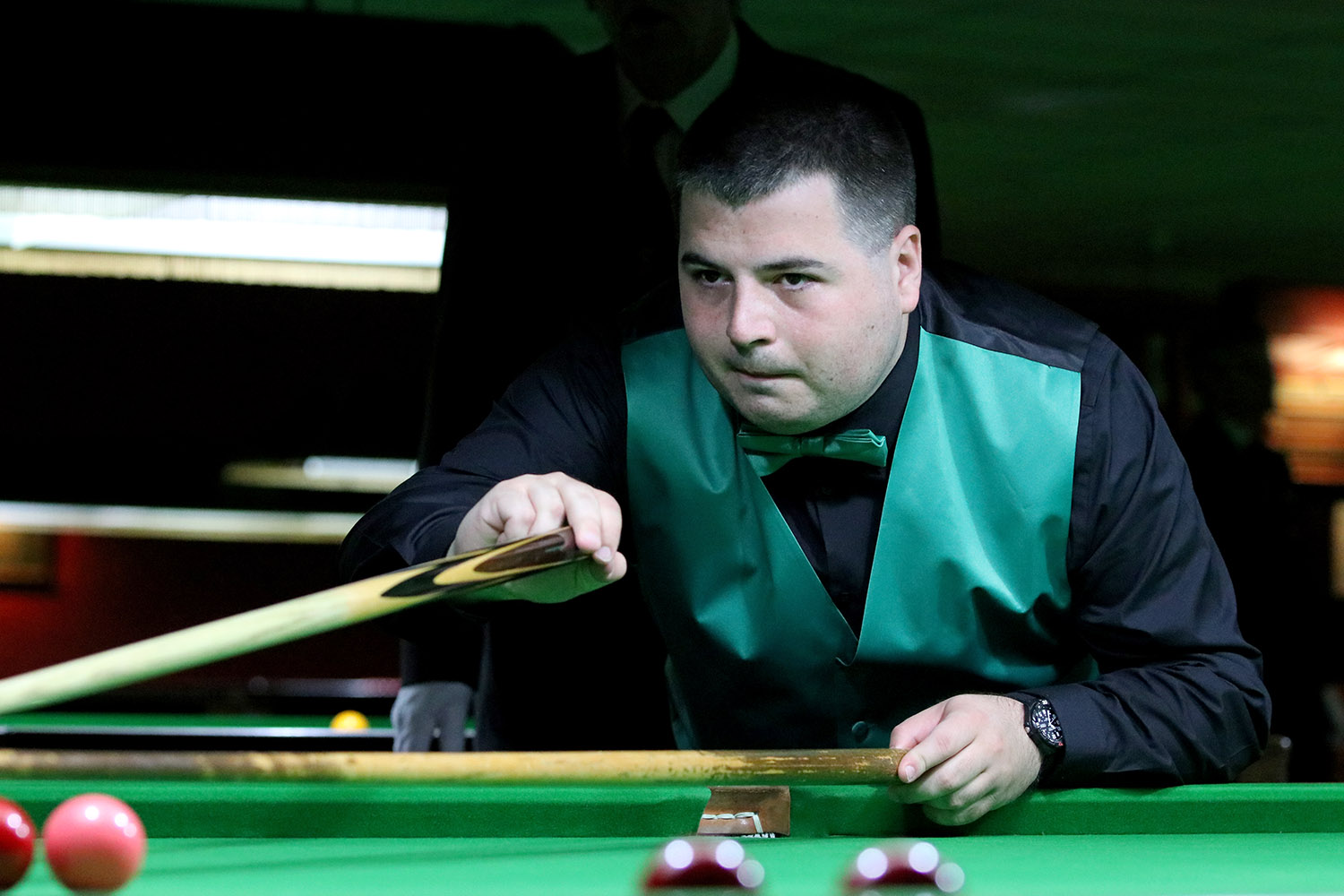 How much are you looking forward to being able to get back to tournaments again when it is possible?

I cannot wait. I miss the socialisation of meeting other people at snooker, I’ve got to know a lot of people playing snooker and to have that taken away has been stressful. When we get back to the swing of things or some normality, I’ll be excited to play against my opponents once again.

What are your off-table interests and hobbies? We hear that you have a black belt at karate…

Computing has been one of my main interests, especially on the video game testing side along with coding on software.

I got my black belt a few years ago, I was doing karate for seven years and in late 2016 I got my first Dan black belt. When the class I usually go to closed down for administrative purposes I sort of retired from the practice as I was busy doing university studies at the time.

I’ve taken up archery over the last year, I usually go at least once a week during the weekends. 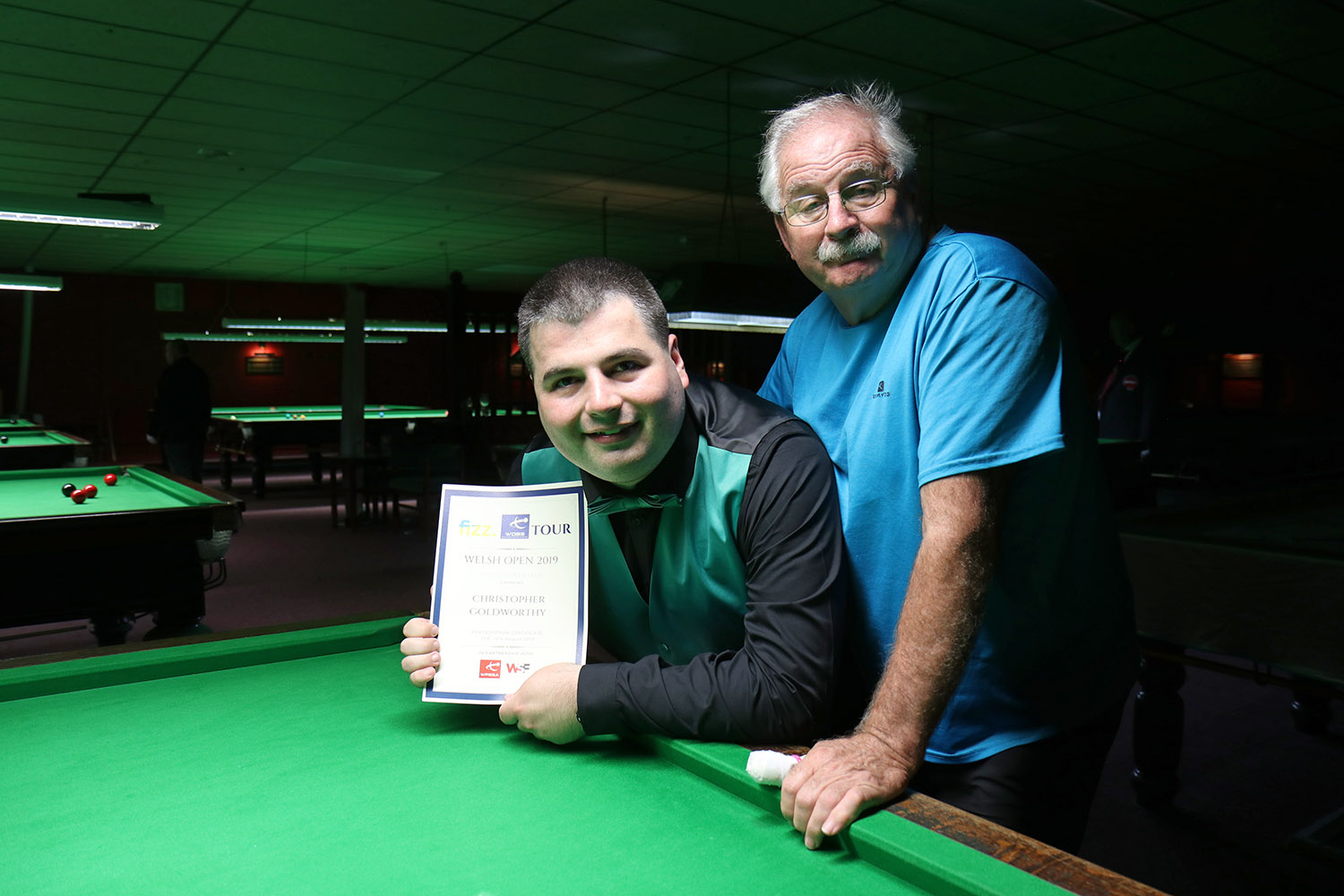 If you want to try snooker out, the WDBS is a good place to start. They have many classifications that allow for all disabilities. Go visit on one of their open days, speak with the coaches and organisers there, try to introduce yourself to other snooker players with disabilities and have a go. Also for your carer have them speak to other carers as well. They will get a bigger picture on how the WDBS works. It’s a friendly organisation.

Thank you to Christopher and we look forward to seeing him and everyone else again in 2021!