Following its conclusion, the main seeding list for World Snooker events will be revised for the first time this season and used to determine the seedings for the Shanghai Masters, one of the few remaining events played under a tiered format and for which the top 16 players will not have to qualify.

On 1 August 2016 following the World Open, the current seedings list will be revised for the first time this season and will be used to determine the seedings for the 2016 Shanghai Masters.

By the time of the revision, prize money earned from the 2014 AT1, ET1, Wuxi Classic and Australian Goldfields Open tournaments will have been deducted and replaced by that from this season’s events up to that date. This prize money has therefore already been removed from the latest provisional seedings list, to show the situation as up to date as possible.

Note that for this season, where a player loses their first match at a tournament, irrespective of the round, they will not receive any prize money towards their official world ranking.

Also note that all seeding permutations below are on the basis that all eligible players enter the relevant events.

For the first time this season, reigning world champion Mark Selby heads into a tournament at risk of losing his grip upon the world number one ranking, with Stuart Bingham mathematically able to overtake him in Yushan.

Although Selby currently holds a lead of some £74,224 on the latest provisional standings, with £90,000 up for grabs for the winner of the World Open, there is a chance that Bingham could make up the deficit by winning the title in China.

Notwithstanding Bingham’s efforts however, a quarter-final run from Selby would ensure that he would remain at top spot, even if Bingham were to lift the trophy.

Interestingly, this could be Bingham’s last big chance to claim the top ranking (for the foreseeable future at least), as he is due to defend a significant amount of prize money in September at the Shanghai Masters which he won back in 2014.

In terms of the seeding list meanwhile, Kyren Wilson will be installed as top seed in Shanghai as defending champion, regardless of any potential change at the top of the rankings.

Taking into account the elevation of 14th placed Kyren Wilson to top seed for Shanghai, it is recent Riga Masters champion Neil Robertson who finds himself on the cusp of missing out on a top eight seeding for China’s second oldest ranking event.

Despite his position however, with a lead of over £30,000 to closest chaser Ricky Walden, it would take at least a final run from him or Ding Junhui, with Joe Perry needing to win the title to stand any chance of demoting the Australian.

Although not quite as important a bracket as in years gone by at some events, for this cut-off it does remain an important section of the rankings with those inside the top 16 spared a trip to Barnsley to qualify to play in Shanghai.

Again, we have to take into account that Kyren Wilson will be top seed regardless of his final position after the World Open, while Ronnie O’Sullivan has entered only once in the last four years and so may or may not be present.

While we have seen some big ranking jumps in recent times as a direct result of the change to a prize-money based system, in this instance we can already say that the top 14 players on the latest provisional list are now mathematically certain to remain inside of the world’s top 16 and qualify for Shanghai, even if O’Sullivan enters.

This means that the first player currently inside the top 16 who could miss out is Barry Hawkins, who has slipped down the rankings in recent months following the removal of prize money from his successful 2013/14 season. For him to do so, two of the following would have to happen:

Similarly, for 16th placed Martin Gould (who is already out of the World Open and cannot add to his total), a semi-final run by McGill or Maguire would see him have to qualify for Shanghai, with the final enough for Michael White or Liang Wenbo and then 11 further players able to pass him by winning the title.

In terms of the draw, Stephen Maguire and Michael White are set to meet as early as the last 32, while Anthony McGill and Liang Wenbo have also been drawn in the same quarter, meaning that both cannot overtake Gould in Yushan.

We now turn to the battle for top 32 places, another important section as those seeded 17-32 will have to win just one qualifier to make it to Shanghai, rather than three matches for those just falling short.

Again, assuming that everybody inside the top 32 plans to enter the Shanghai Masters, Peter Ebdon would be most vulnerable in 32nd place, with Ali Carter and Luca Brecel only narrowly above him. 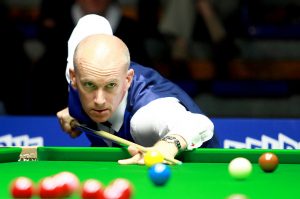 That said however, the trio do have a comfortable cushion to the chasing pack, with closest chasers Thepchaiya Un-Nooh, Jimmy Robertson, Mark King and Mike Dunn all needing to reach the final to threaten the top 32.

Beyond those players, anybody else inside the top 64 (down to 64th placed Yu Delu), could catch them by winning the title.

As always at the start of the season, there is something of a cushion between 64th and 65th position, due players outside of the top 64 from the previous season having seen their totals reset to zero, or having been relegated from the tour. This means that the closest players to breaking into the top 64 are those who are on the second year of a two-year card and enjoyed a strong 2015/16 season.

Leading the way of that group is Alfie Burden, who would need to reach the semi-finals to overtake Yu Delu above him in 64th, while next man Jamie Cope would need to reach the final. Importantly for Burden however, Cope would have to reach at least the quarter-finals to overtake him, meaning that he can expect to be in pole position to benefit from any potential non-entries above and so be required to win one fewer matches to make it to Shanghai.

For more updates throughout the event, check back here at WPBSA.com or alternatively follow my Twitter feed @prosnookerblog and @wpbsaofficial