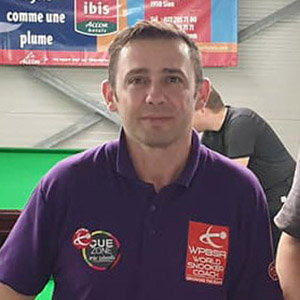 As a player, Stéphane Ochoiski start to play snooker in 1990 and he has won six French championships, was French number one many years, and won more than 15 national ranking tittles.

He was also a French international player 39 times, and many of them captain of the team. He is the first and only French player to play live on Eurosport in a pro event in 2015 in Fuerth at the Paul Hunter Classic, playing Stephen Maguire.

Stéphane opened his own snooker academy in France in 1991. In 1995 he opened the first French snooker school and he has coached more than 5000 peoples since. He has played a significant role in the development of snooker In France.

He was also the French national coach for juniors and men for many years and a lot of french champion has been formed by Stephane. He has also become an international coach and has coached people in Albania, Germany, Switzerland, Morocco, Czech Republic and Belgium.

Stephane now has 30 year of experience in snooker and collaborates with coaches including Chris Henry, Nic Barrow, Alan Trigg and many more.