Today sees the return of televised snooker with the start of the 2019 Dafabet Masters at the Alexandra Palace in London.

A tournament that needs little introduction, the Masters is snooker’s oldest and most prestigious invitational event which brings together the world’s top 16 ranked players following last month’s UK Championship to battle it out for the £200,000 top prize.

The second of this season’s triple crown events, this year’s Masters will see Mark Allen begin the defence of the Paul Hunter Trophy after he memorably defeated Kyren Wilson last January to capture the title, while the likes of world number one Mark Selby, reigning world champion Mark Williams and of course record seven-time champion Ronnie O’Sullivan will be among a strong field looking to emerge victorious a week from now.

There are four changes in personnel in this year’s draw with Neil Robertson, Stephen Maguire and Stuart Bingham returning to the tournament after missing out in 2018, while Jack Lisowski is this year’s only debutant having broken into the top 16 just before Christmas at the expense of former Masters runner-up Marco Fu. Joining Marco on the sidelines are Ali Carter, Anthony McGill and Liang Wenbo, all of whom qualified for last year’s event.

Having added titles in Daqing at the International Championship and most recently the Scottish Open in Glasgow last month, the Northern Irishman is currently playing the best snooker of his career, as reflected by his impressive position at the head of the current one-year ranking list.

In an interesting quirk of the draw, Allen will begin his title defence against against Luca Brecel in a repeat of their first-round match here last year. On that occasion Allen came through a match best remembered for Brecel’s use of two cues as a 6-3 winner and on current form will be favoured to maintain his record of having not lost in the first round here since back in 2014.

For Brecel the season so far has seen him reach the last 16 of a ranking event on just one occasion at the Northern Ireland Open, while he also reached the semi-finals of the SangSom 6-Red World Championship in Thailand narrowly losing out to Ding Junhui.

It is Allen who leads their respective head to head record 4-0, having won 21 of their 29 previous frames and he will be looking to make it five out of five from 1pm today (Sunday).

Awaiting the winner will be either Ding Junhui or Jack Lisowski who are set to face off in what is arguably one of the most difficult matches in the draw to predict.

It is now eight years since Ding defeated Marco Fu 10-4 to win the Masters title in what was the tournament’s final year at the Wembley Arena, but since then his record at the Alexandra Palace has been surprisingly poor having lost in the first round on six of his last seven appearances in the competition.

So far this season his best results have come at invitational events, with a final run at the 6-Red World Championship as well as a semi-final appearance at the Shanghai Masters, while away from the table the Chinese number and his wife Apple celebrated the birth of his first child earlier this season.

This year’s sole debutant Lisowski on the other hand has been one of the most consistent players this campaign with one final, one semi-final and three quarter-final runs to his name in ranking events. A player who many within the game had tipped for the top more than ten years ago, Lisowski is now starting to regularly deliver on the big stage and despite not yet breaking through to lift silverware, more than merits his place in London this week.

Surprisingly there is little to go on in terms of head to head, Ding having comfortably won their sole previous encounter at the Shanghai Masters nearly five years ago. Their second meeting comes tomorrow (Monday) at 7pm.

John Higgins begins his campaign for a third Masters title with an opening round clash against Welshman Ryan Day.

For Higgins his struggles this year, both with his game and at times motivation following back-to-back defeats in World Championship finals have been well-documented, however he showed signs of a return to form at the Scottish Open before Christmas as he made his ninth 147 maximum break against against Gerard Greene.

Perhaps most interestingly however for a player who has reached the final of this tournament on no fewer than four occasions, Higgins has a surprisingly patchy record at the Masters, having lost in the first round on 12 previous occasions. That said, many of those defeats came at the tournament’s previous home in Wembley and since the tournament moved to the Alexandra Palace he has fallen at the first hurdle just twice from seven appearances.

Ryan Day meanwhile will be making only his sixth appearance at the event, looking to improve upon previous quarter-final runs in 2010 and significantly last year when he actually lost 6-1 to Higgins in this competition.

It is Higgins who leads their career head to head 12-6 but so far this season it is one apiece, Day having edged out the Scot 6-5 at the Shanghai Masters before Higgins returned the favour with a 4-3 win at the Champion of Champions, suggesting that we will have another close encounter when they meet tonight (Sunday).

The winner of their match could face Ronnie O’Sullivan in the quarter-finals, with the seven-time champion looking to capture the title for what would be the fourth time in six years. As has been the norm for O’Sullivan in recent seasons, he has chosen his events carefully and so far the approach has paid dividends with three wins from five competitions, most memorably at the UK Championship a month ago where he claimed a record 19th triple crown title.

The man with the unenviable task of looking to stop the undoubted tournament favourite in the first round is Stuart Bingham, back at the tournament after missing out in 2018 due to suspension.

It has so far been an encouraging season for Bingham who notably claimed victory at the English Open back in October, as well as reaching the last four at the UK Championship to confirm his place in the top 16. With previous victories against O’Sullivan at the World and UK Championship events, success this week would see him join an exclusive club of players to have defeated the five-time world champion at each of the triple crown events and he will not be short on motivation to do so when they meet on Monday afternoon.

In the third section we find the current world number one Mark Selby, looking to capture his first Masters title since 2013 when he lifted the trophy for a third time.

It has so far been a mixed season for the Jester from Leicester, highlighted by victory at the China Championship earlier in the season, but defeat to James Cahill in the opening round of the UK Championship in York was a disappointing end to 2018 for a player under pressure to retain his top ranking with a significant amount of prize money to defend over the coming months.

He will begin his campaign against Scotland’s Stephen Maguire, who is delighted to back at the Alexandra Palace following a two-year absence having previously dropped out of the top 16.

A player who thrives on the big occasion, Maguire has reached the semi-finals of the Riga Masters and English Open this season, as well as the last eight at the UK Championship to ensure his return to London for this competition.

Selby shades a close head to head record between the two 9-6, winning their most recent clash at the 2017 China Open on his way to the title.

Awaiting the winner will be either Judd Trump or Kyren Wilson who meet in what is perhaps the most eagerly anticipated match of the opening round given the increasing rivalry that is building between the two.

Both have enjoyed strong starts to the season with Trump claiming victory at the Northern Ireland Open, while Wilson lifted the title at the Paul Hunter Classic and the non-ranking 6-Red World Championship events.

Their head to head record makes for interesting reading with Wilson leading 6-3 having taken their previous four encounters, a run that started a year ago with his memorable 6-5 victory from 5-2 behind in the semi-finals here at the Masters. However, while the Championship League is played in a very different environment to an event such as the Masters, it is worth noting that Trump has two wins against Wilson in that competition already this month ahead of their date at the Alexandra Palace on Wednesday.

In the bottom section of the draw we find English pair Shaun Murphy and Barry Hawkins, who meet in what looks to be another contest that could go either way at the Masters.

For Murphy the match takes on a different complexion to how it might have looked a month ago when he was short on form and confidence following a barren start to the season. Following his run to the final of the Scottish Open and his eye-catching performances at the German Masters qualifiers which saw him make seven centuries in two matches to qualify for Berlin however, he will now be hoping to carry this form into the new year as he looks to claim this title for a second time.

Hawkins meanwhile is another who should come into the tournament match sharp following a week in Coventry for the Championship League and has so far enjoyed a solid start to the season with runs to the final of the Shanghai Masters, the semi-finals of the World Open and the quarter-finals of the China Championship.

The last meeting between the pair over this distance actually came at the Masters two years ago when Hawkins ran out a 6-1 winner, while Murphy won their most recent meeting back at the 2017 Gibraltar Open 4-1. The latest chapter in their history gets underway on Tuesday evening.

And finally we have reigning world champion Mark Williams who will begin his latest tilt at the Masters title with another eye-catching contest against fellow left-hander Neil Robertson.

Somewhat surprisingly, the pair have not met in a match of best of 11 frames or more since this tournament back in 2012, meaning that there is relatively little to go on in terms of head to head form between the two in recent times.

Both have however claimed silverware already this season, Robertson at the first tournament in Riga while Williams captured his 22nd career ranking title in Yushan at the World Open in August.

Having publicly enjoyed himself since his incredible victory at the Crucible back in May, it will now be interesting to how Williams approaches the second half of the season beginning with this week’s action at the Masters. Robertson meanwhile has been the stand out scorer of the season so far with 47 century breaks to his name already and will be more hungry to succeed than most this week having missed out on competing at the tournament a year ago having briefly dropped out of the world’s top 16.

Their contest takes place on Tuesday afternoon at the Alexandra Palace.

The action gets underway on Sunday 13 January – let us know who you think will win via our social media platforms at the top of the page. 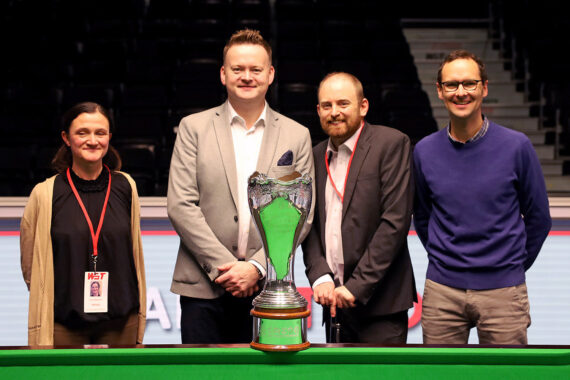