Flat Draws and Top Seeds – The Story So Far

Home » Flat Draws and Top Seeds – The Story So Far

Following four days of qualifying for the International Championship there have now been 15 full-ranking events played under the flat draw, 128 man format first introduced at the 2013 Wuxi Classic.

Four of these tournaments were able to accommodate all 128 players at the venue (the UK Championship and Welsh Open), while the remainder have seen at least one qualifying round held in the UK.

As was demonstrated by the first round defeat of 2012 winner Judd Trump at the International Championship qualifiers on Saturday evening, the format is one that does give those further down the rankings the opportunity to start from the same round and so to cause a shock from time to time.

But how have those at the top of the rankings generally fared over the past two and a bit years? In reality, how many upsets have we seen?

Prior to last week there were six players in that category, but Stephen Maguire’s defeat to Noppon Saengkham in Barnsley saw his previously unbeaten run come to an end last Thursday.

Also coming close to perfect record is Joe Perry, whose only defeat came at the 2014 China Open qualifiers when he ran into an unstoppable performance from Welsh amateur Duane Jones. Similarly Mark Allen has also lost just one match, at the same stage of the same event a year later.

Another to have lost just one of these matches is Ronnie O’Sullivan at the 2014 German Masters qualifiers, though he has entered fewer events than the others in the top 16 during the past couple of years.

While he has only broken into the world’s top 16 relatively recently, Michael White has also maintained a strong record at qualifying events, losing only to Mark King at the last 64 of last season’s German Masters, a round that was held in Wigan.

Another second round loser at the German Masters was Marco Fu, who also lost to Mitchell Travis at the first round of the 2013 UK Championship in York.

Reigning Masters champion Shaun Murphy lost his first two matches under the then new format, to Alex Davies at the 2013 Wuxi Classic and 2013 Indian Open qualifiers, but has been able to qualify for all of the events since.

Also losing his first match under the new format was Mark Selby, while more recently the world number one ound himself on the wrong end of a six frame streak by Oliver Lines at the 2014 International Championship qualifiers, losing 6-4.

Arguably the most efficient player during the early rounds of events in recent years has been Judd Trump, who since losing to Zhang Anda in qualifying for the 2013 Indian Open was able to win an impressive six opening round matches without the loss of the frame.

It was to be an unexpected reversal of fortunes for the seventh seed at yesterday’s International Championship qualifiers though as he found himself whitewashed by 34-year-old Michael Wild.

The only two top 16 players to have lost more than two of these matches are Ricky Walden and Ding Junhui, the former twice missing out on the German Masters, as well as the 2013 International Championship following defeat to India’s Aditya Mehta.

Ding meanwhile after his record-equalling 2013/14 season was to be a shock loser against amateurs Oliver Brown and Wang Zepeng in qualifying for the Wuxi Classic and International Championship events last year, before he later lost 4-1 to Lee Walker at the Welsh Open earlier in February.

Of course this is just a snapshot at some of the highest ranked players on the tour. There are several other players who have performed consistently well at the early stages of events, Ryan Day notably one player ranked outside of the top 16 to have been an ever-present at venues during the past couple of seasons.

Upsets do however remain possible and no doubt that Michael Wild’s unlikely victory yesterday will not be the last this season. 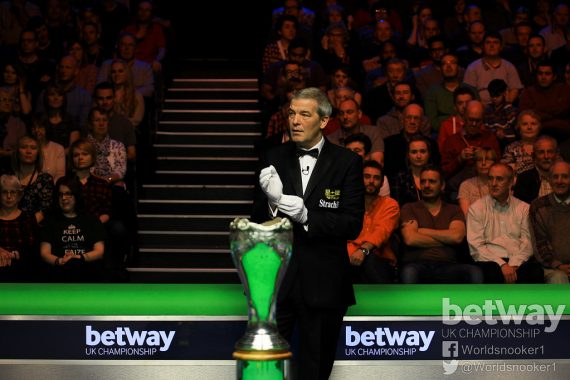