Boston’s Joe Hardstaff has been a mainstay on the 360Fizz WDBS Tour since his debut in 2016, reaching the final of the 2019 Northern Classic and previously winning the Challenge Cup tournament at the 2017 Manchester Classic.

We recently caught up with the Group 3 player to talk about the development of the WDBS circuit since his debut, his own snooker journey and how he is currently coping during the ongoing coronavirus outbreak…

Hi Joe, first of all how are you managing during these most unusual times with the ongoing effects of the COVID-19 pandemic?

It is very strange. Like anything in life it’s about adapting and making the most of the opportunity this provides. I am the assistant head teacher of a special school that teaches pupils with social, emotional and mental health issues (SEMH) so we have been very busy providing support to the families and pupils. We have a few pupils that need to attend and we have a rota system for staff that means I am on campus one week out of three. The rest of the time I am working from home providing and supporting online video lessons for staff and pupils that can access it.

I do have two of my own children at home too, so it is nice to be able to spend time with them whilst they do their work from home. I am certainly not bored! 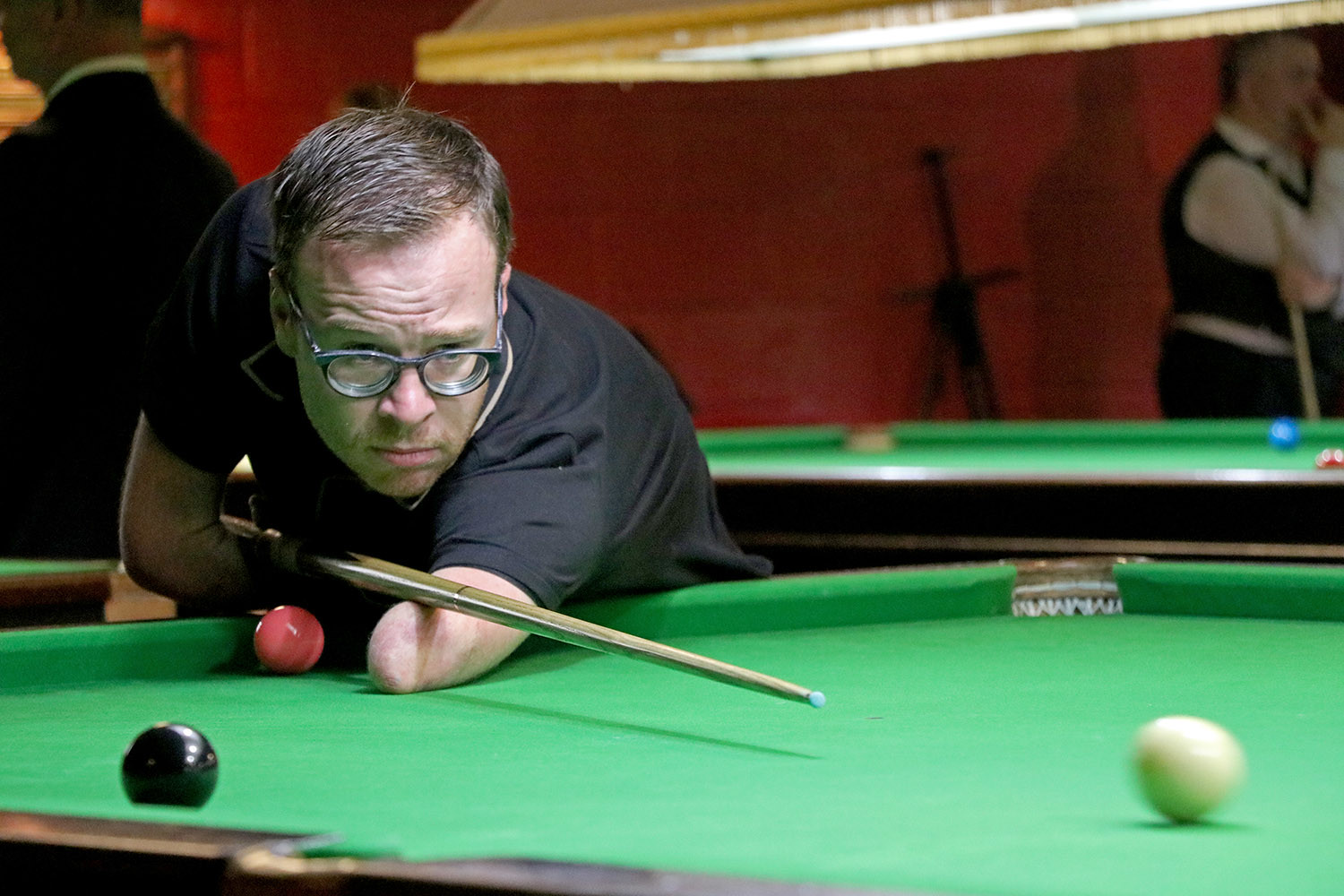 Do you currently have access to a snooker table? If not, how much do you miss playing our sport?

Unfortunately I do not have access to a snooker table. I keep trying to talk my wife into letting me build a big shed in the back garden but it’s not going to happen!

I am missing playing terribly. When the lockdown was only a few days in, I would often get the urge to play but then realise I can’t which is difficult. I have been watching old videos of professional matches which does help in one way with the snooker ‘fix’ but it also makes me want to play even more.

I am a competitive person, so to feed my competitiveness I have been playing online video games, which has helped.

You have been a part of WDBS almost since the beginning, having played since our second ever event in Manchester over four years ago. What have the events meant to you over that time?

I remember meeting you (Matt Huart) in the first event I went to, the welcome I received was almost overwhelming from all of the staff involved. Since then it has grown, developments have been made for the better and it feels like it has real status now in the game. For me personally, one of the most important developments was the classification changes. It has made our group (G3) very competitive and closely contested at every tournament. We all enter believing we can win it.

I really liked the change to formal attire. This just raises the image and brings it in-line with the professional men’s and women’s game.

The most recent addition of ranking points has added even more status to the competition. This will increase the participation and the want to win, again a huge development and a very welcome one from my perspective.

I like going away for the weekend to just focus on snooker. Being with like minded people, having a good catch up and playing some extremely competitive matches. My only disappointment is that I have not been to as many events as I’d like. My position at work makes it more difficult but I am hoping to go to more in the coming seasons. 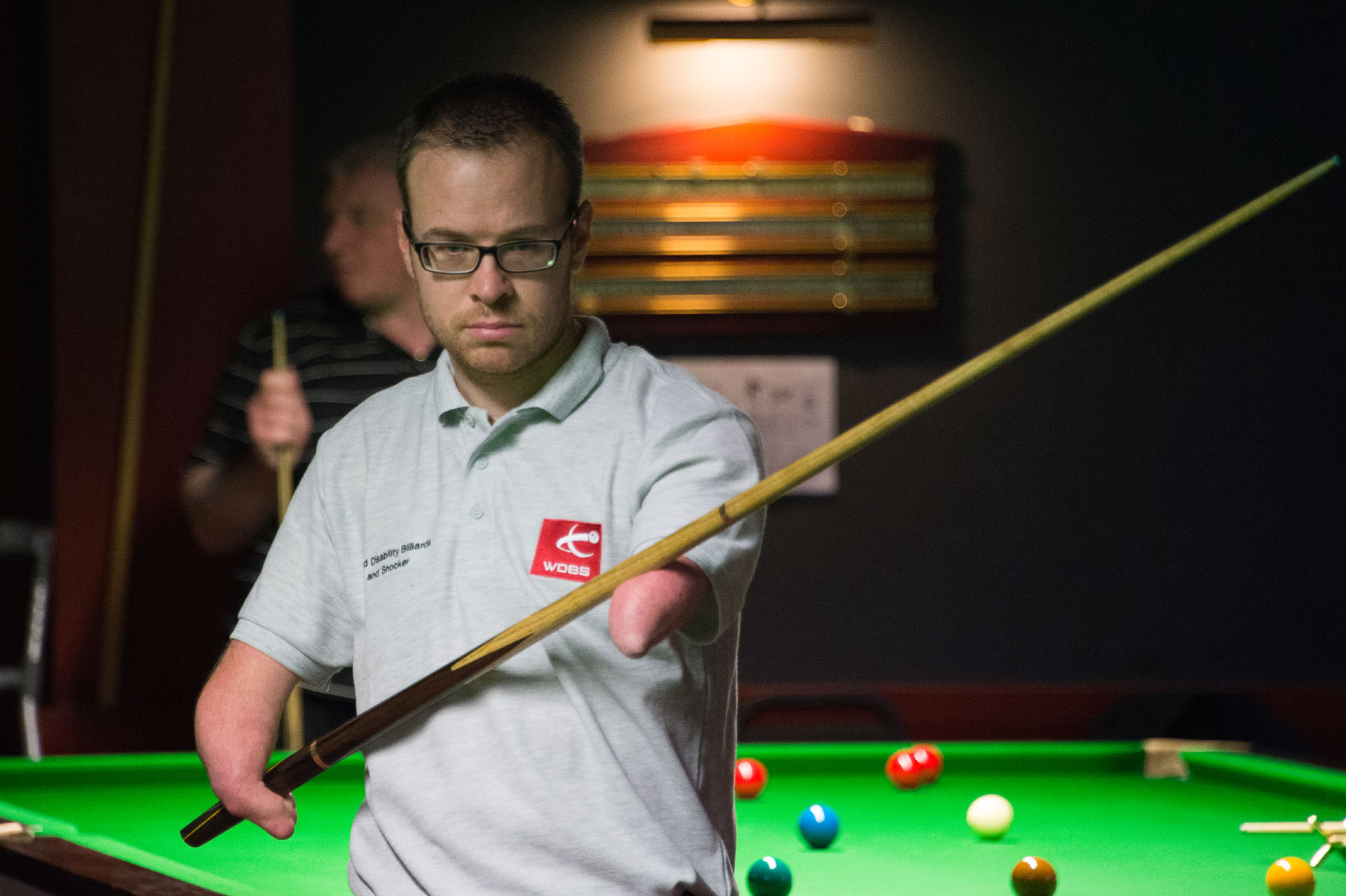 What first attracted you to snooker and how did you get involved with the sport?

Seeing snooker on the TV when I was a young boy got me interested. I went to the local snooker club and had a go. I instantly fell in love with cue sports. It’s something that I can compete in against anyone.

I have a condition called Phocomelia and the deformation of my upper limbs is severe so most people look at me and think ‘really, this guy can play?’ then when I start to play they have utter respect as a player.  The mechanics of how I play are quite different in terms of arm movement and this is something that I work on a lot. As we all know, your cue action is the most important thing, and to get that as consistent as possible is a key part of playing well. I find shots difficult that require cueing over balls with a high bridge. I often use a shot in these situations that I call a ‘floater’. This is where I hold the cue in the air and play the shot without a bridge as such. Very difficult and quite inaccurate at times but it’s the best I can do. This is when I feel most at a disadvantage but fortunately these shots don’t need to be used too often.

I have started to use a ‘sock’ on my bridge arm. I have found that this gives me a consistent stroke especially in warmer conditions. I used to find it hard in the heat as my arm would sweat and become sticky. The sock has resolved this.

I don’t have a long reach either, so I have to use the rest quite a lot. This has its own difficulties as like most players I prefer to have my hand on the table to play shots.

I have had a little coaching but find that they can work on the usual things such as shot approach, aiming etc but when it comes down to it, I have to figure out a lot myself as most coaches have never come across a player like me. I understand the ‘key ingredients’ so try and apply them to how I play. I am a tweaker, and like to find ways of getting better. 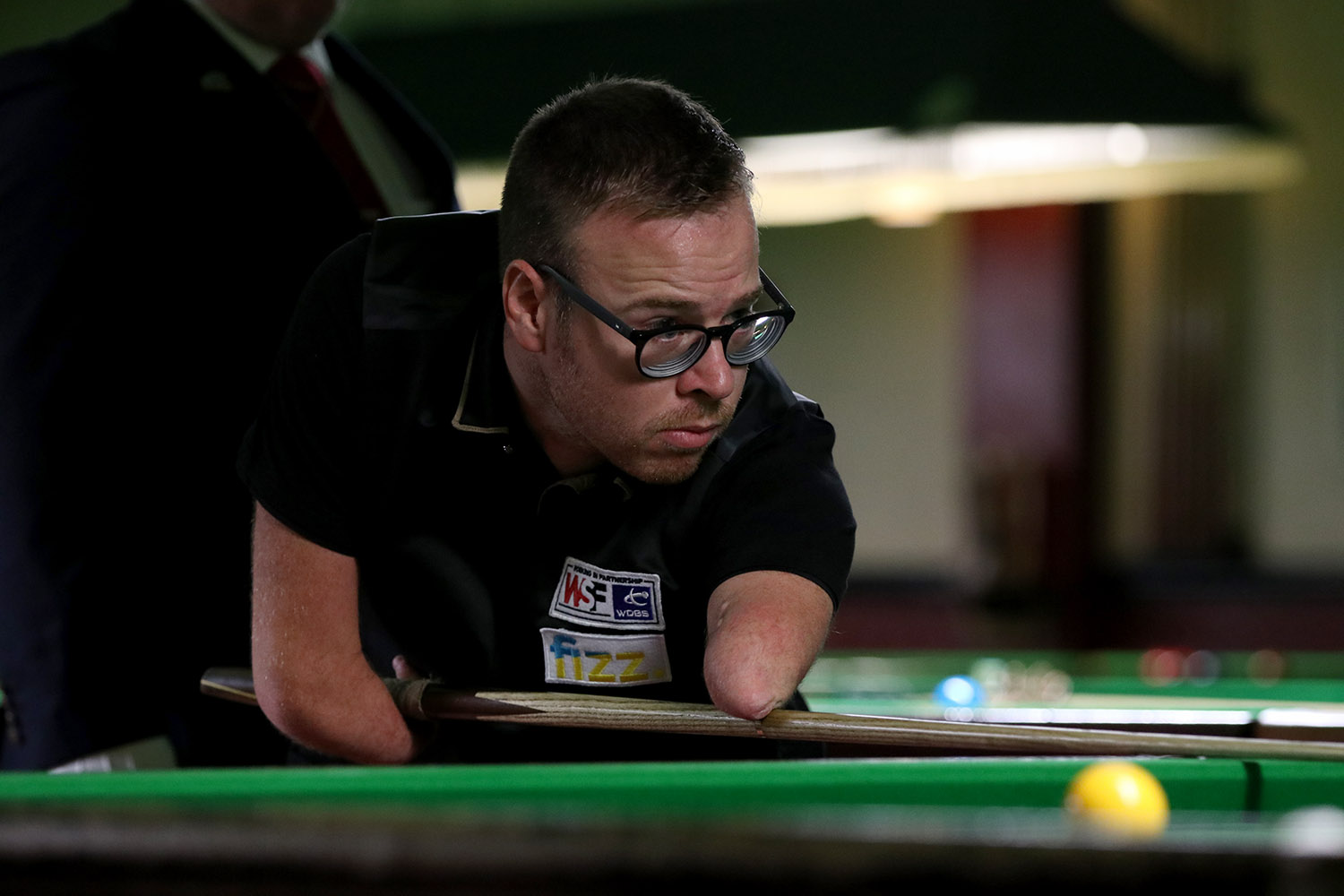 As a Group 3 player you are part of a relatively small but competitive group with the likes of John Teasdale, Nigel Coton and Kal Mattu. How do you find the challenge of competing against these players?

As I mentioned earlier I think our group is hugely competitive. They play with one arm, I play with two half length arms but the difficulties we all have, I think, balance out. For example, they all use some sort of rest device as a bridge, I use my upper arm. My grip isn’t great as I don’t have a hand, they can all grip with a full hand. There cue action mechanics are quite conventional, mine isn’t.

I am really happy with the group as I think we all are. Yes it is quite small, usually four in the group but we all get along really well, they are a really nice group of people and like I said we could all win any one of the tournaments.

We see many players in the group using various implements to enable them to play. How inclusive is a sport like snooker for people with severe upper limb disabilities?

I think snooker is very inclusive as a sport for everyone. For those of us that have severe upper limb disabilities it is about how well you can adapt to using a cue. There are some implements that could make it easier but it’s about finding the right one to suit your needs. There are not a lot on the market to choose from.

I have considered going to my limb specialists and enquiring about an arm adaptation that may help but I like the feel of the cue on my arm, and I think an implement similar to a rest will take away that feel. 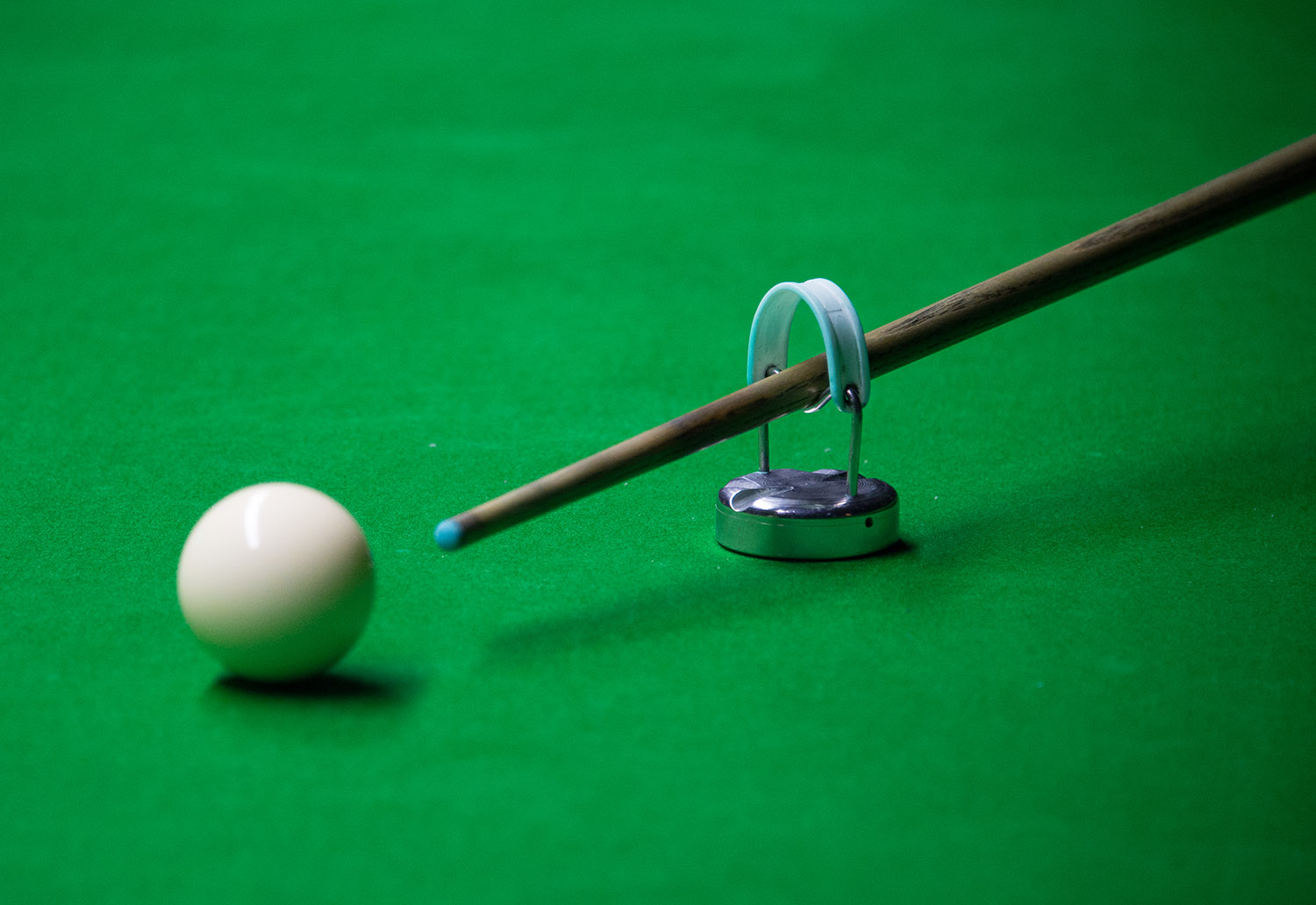 What do you like to get up to when not at the baize?

I am a family man first and foremost, so spending time with my two boys (11 and 16)  and my wife takes most of my time up. We like going for walks, days out to the national trust places, woodland areas and family attractions, things like that.

We also like spending time in the back garden in the evening with our fire pit, marshmallows, some music and a glass of wine.

My youngest has just set up a YouTube channel – Happy Cactus, whilst in quarantine and because I have the skillset I have been roped in to editing the videos. I have appeared in some too!

It is great fun actually and a good skill to teach him.

We have seen your sons at a number of tournaments, do they play the sport?

Yes they both do now. The oldest one wants to join a local team and get playing in the league, so that will be nice, but he plays football at a good level and has aspirations to play professionally in America over the next couple of years, so most of his time revolves around training. The youngest is still getting to grips with the basics but really enjoys it, which is nice. 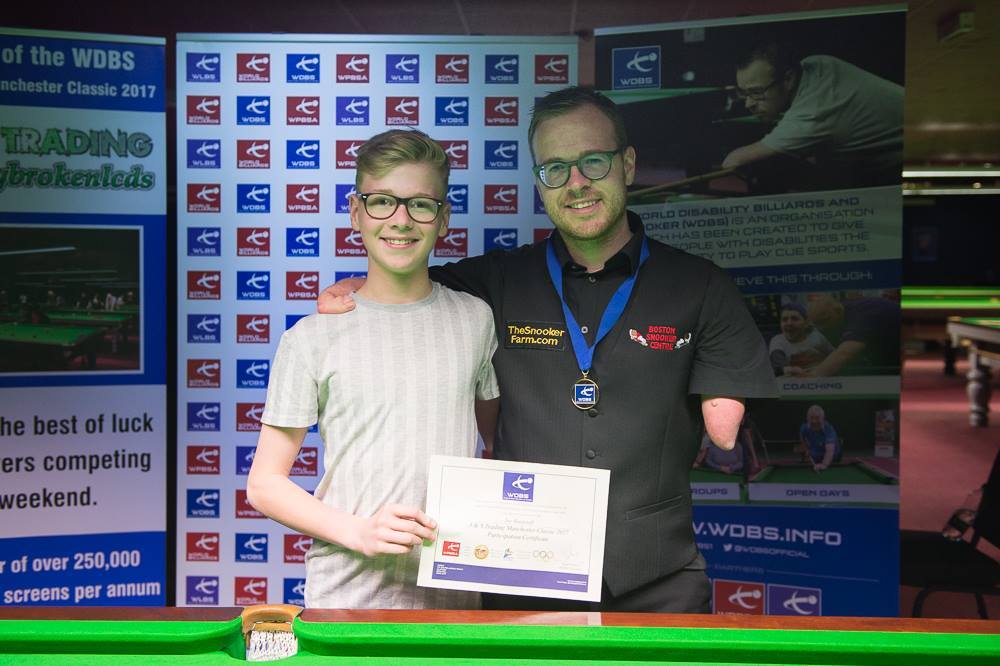 What message would you have for other people out there with disabilities who might be considering getting involved with WDBS?

Go on the website, read about it all. Sign up to the facebook page and keep in touch with what is going on. Then if you want to get involved in a tournament but are not sure what it will be like in reality, reach out to people on social media and ask to talk to someone. I’m sure they will be happy to give you a good idea of what it is like from entering the tournament, getting a hotel, the venues, food and drink, the evenings, costs, all the things you may have questions about. I’d be very happy to answer any questions about a tournament weekend from a players perspective.

You may be worried about the standard and ask yourself what if I’m not good enough?

Well there are some very good players, and my advice is you won’t know until you try. Even if you turn up and get a good lesson in how to play and you lose all your games, at least you know what you will need to do to compete. You may turn up and win, who knows until you have a go. But let’s not forget that for most the taking part is important and you want to win, but the social aspect is equally as important. I guarantee you will meet people that inspire you, you will get to know them and become friends.