Andrew Pagett is set to snooker’s top tier after he defeated Heikki Niva in the final of the 2020 EBSA European Amateur Snooker Championship.

A former Crucible Theatre qualifier who last featured as a professional in 2015, Pagett becomes the fourth different Welshman to claim the prestigious continental event, in this its 29th edition. Former winners of this championship include Mark Allen (2004), Luca Brecel (2010) and Scott Donaldson (2012).

Due to the ongoing COVID-19 pandemic, the entry and schedule for this year’s tournament in Albufeira, Portugal was reduced.

Pagett began his campaign by topping his group without dropping a frame and qualifying for the subsequent knockout rounds. There he dispatched compatriot Ben Fortey 4-2 before eliminating Northern Irish national champion Declan Lavery 4-1 with breaks of 56 and 79 to reach finals day. During the last four, the 37-year-old registered runs of 50 and 57 as he overcame fellow ex-professional Ross Muir of Scotland 4-2.

In the other half of the draw Niva advanced to become the second player from Finland to reach the European title match, following in the footsteps of 1997 and 2013 champion Robin Hull. On his route Niva ended the hopes of English amateur champion Ben Hancorn and Belgian national champion Kevin Hanssens via deciding frames in the quarter and semi-finals respectively.

The final brought together the top two seeds from the round robin phase. Looking to gain promotion onto the main tour for the first time, 24-year-old Niva calmed his nerves by taking the opening frame. However, it would be the only time he led as Pagett strung together the next four frames – which included a tie-break finish in the fourth – to move one away from glory. The outsider reduced his arrears when chalking up frame six, but the Caerphilly cueist wasn’t to be denied as he sealed the next to win 5-2.

Pagett has featured and performed very well on this season’s Challenge Tour, recording an event victory and finishing third in the overall standings. However, he will no longer need to attend the play-offs as this latest triumph ensures that he will be nominated to receive a coveted two-year World Snooker Tour card.

Preceding this event, exciting Ukrainian prospect Iulian Boiko won the European 6-Red Championship. The 14-year-old progressed through his group and then six knockout round matches, culminating in a 5-3 final success against former world number eight Darren Morgan. Courtesy of the title, Boiko will represent the European Billiards and Snooker Association at the 6-Red World Championship later in the year.

Earlier in the festival at the Salgados Palace Hotel, the Republic of Ireland’s Aaron Hill completed an unprecedented double by conquering both the European under-18 and 21 categories. The latter rewarded the Cork teenager a debut on the full-time professional circuit.

Results – from the quarter-finals onwards 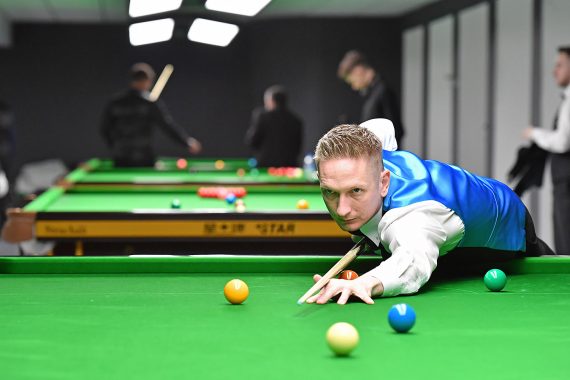