Marco Palmieri won the Italian National Snooker Championship for the first time earlier this month when he defeated Gianluca Manoli 5-3 in the final. 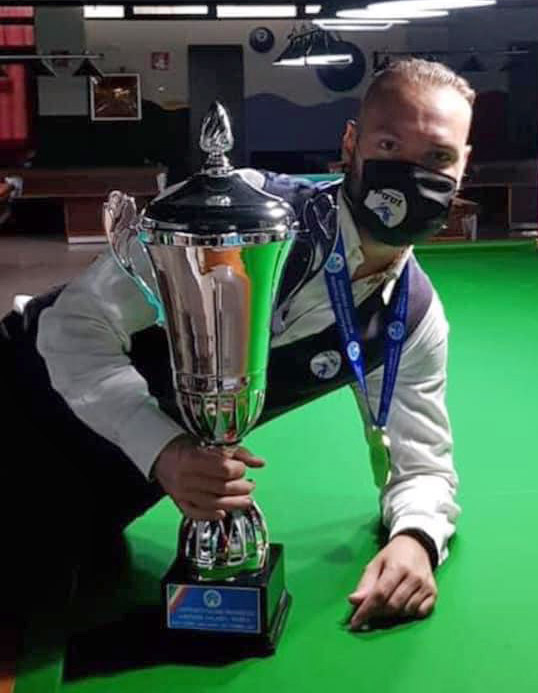 After being unable to hold the annual championships in 2020 due to the coronavirus pandemic, the Federazione Italiana Biliardo Sportivo (FIBiS) organised the sixth edition of their blue riband snooker event at the ASD Bar Torre in Bolzano.

The championships were split into three divisions and it was Modena-based cueist Palmieri who took the country’s top snooker accolade.

Palmieri qualified from and finished top of his round robin group following four wins from four. He then defeated Simone Coviello 4-0 in the quarter-finals before dethroning back-to-back defending champion Pierfrancesco Garzia 4-2 in the semi-finals.

In the title match he faced fellow maiden finalist Manoli, who had eliminated 2019 runner-up Valerio Grandi 4-2 in the other last four tie.

The best-of-nine final proved to be a close affair with the opening six frames shared. Palmieri went back ahead with the seventh and then made a 54 break on his way to claiming the eighth and getting across the line.

“I never expected this – I didn’t even have a hotel room for the last night. When I won, it was just beautiful, a great experience. In 2022 I’m going to the European Championships – it will be a wonderful experience,” said Palmieri.

Former champion Gianmarco Tonini made the tournament’s highest break of 79 during the round robin phase.

The snooker community in Italy continues to grow with FIBiS currently having around 300 players enrolled. FIBiS will be represented at the upcoming EBSA European Amateur Snooker Championships in Portugal during October.