Barry Pinches will line-up alongside legends of the sport at the Crucible Theatre next month after winning this weekend’s ROKiT Sheffield Masters qualifying event at the Northern Snooker Centre in Leeds.

As with all WSST tournaments, though, a space was made available for an amateur qualifier to join them there. A bumper field of 78 hopefuls featured in the qualification draw, with the winner guaranteeing themselves a coveted berth in Sheffield.

That honour goes to experienced former professional Pinches, who came through three days of tough short-course matchplay. The East Anglian cueist didn’t drop a frame in defeating Ali Anwar, Asegir Gudbjartsson or Sanjay Meghani during the early rounds, but he did have a tougher time overcoming Wayne Cooper, 3-2, and then Garoid O’Connor, 3-1, in the quarter and semi-finals respectively.

However, Pinches found himself in the perhaps unusual situation of knowing that his Sheffield passport was already stamped, as fellow finalist and world champ Canavan was an automatic seed for the venue stages. Despite his primary objective now having been achieved, the 48-year-old was soon celebrating again after a 3-1 win over the Jersey based star in the final.

Success means a return to the Crucible for Pinches, who during his twenty-six seasons on the top tier qualified for the World Championship three times, with his last appearance coming in 2005.

Despite losing to Shaun Wilkes in the last 32, Northern Snooker Centre local Jonathan Bagley’s Crucible dream is still alive; albeit on a different scale.

That’s because Bagley finished the event top of the World Seniors amateur ranking list and is therefore the circuit’s nomination for the 2019 Betfred World Professional Championship qualifiers that are being held at the English Institute of Sport in Sheffield between the 10th-17th April.

Taxi driver Bagley has been the most consistent amateur on tour since its inception, qualifying for several venues and reaching the grand finals of both Masters events in 2018 at Goffs and the Crucible. He is just three victories away from making the main draw in Sheffield.

Going into the weekend, the only person who could overtake Bagley was Northern Ireland’s Patrick Wallace, but a last 64 loss to fellow former professional Matt Couch ended his hopes.

Following the conclusion of the qualifier, the draw for the main event was made on Monday morning.

Thorburn won the title last year after a dramatic black ball shootout and the Canadian veteran will begin his defence against Crucible King, seven-time world champion Stephen Hendry, who is searching for his maiden tournament victory at seniors level. Pinches is rewarded with a showdown against 1997 world champion and current Seniors UK Championship holder Ken Doherty.

In the bottom half of the draw, third seed Jimmy White will be aiming for his third consecutive title on the circuit following his Seniors Irish Masters and World 6-Red triumphs in recent months. The Whirlwind will face 1986 world champion Joe Johnson, whilst Canavan will clash with another former world champion, 1991 victor, John Parrott.

All these quarter-final matches will be played during the afternoon session at the Crucible Theatre, with the semi-finals and final taking centre stage in the evening. All matches will be the best of three frames, although the now customary black ball shootout will occur should the match be 1-1. 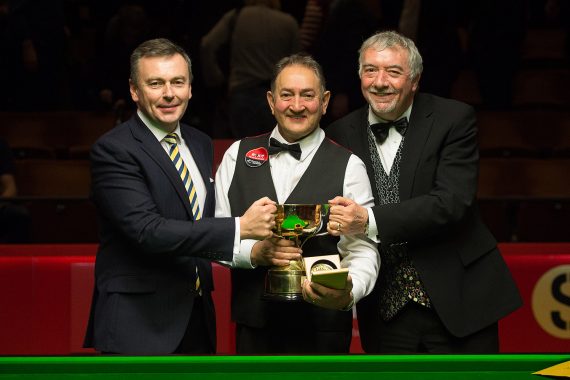