Although there are nearly two months to go however, with invitational events including the Masters and Championship League most immediately on the horizon, we are already at a critical stage in the qualification race with just two counting events still to be completed before the field for Preston is set.

As was the case last season, the top 32 players on the one-year ranking list will earn their places at the World Grand Prix. But how does this ranking list differ from the world’s official ranking order?

While the official world ranking list is calculated over a rolling two-year period, the one-year ranking list used to determine qualification for Preston includes only prize money earned since the start of this season at the 2017 Riga Masters, through to and including the 2018 Shoot Out in Watford. This covers a total of 14 counting events, 12 of which have already been completed, in addition to the first two rounds of the German Masters.

For the avoidance of doubt, this does not include prize money earned from maximum or high break prizes, or invitational events such as the Hong Kong Masters.

A year ago, the final qualifying place was taken by Martin Gould with £40,550 enough to see him finish in 32nd spot.

Already however, as we look at the very latest provisional World Grand Prix list (via snooker.org), which includes prize money earned at the German Masters qualifiers, we can see that the bar has clearly risen this season with current 32nd placed man Ben Woollaston sitting on £53,500.

While it is impossible to predict with any feeling of certainty as to what the final amount required will be, we can safely say that those from 24th placed Ali Carter upwards can already book their hotel rooms for Preston.

But how about those below and currently either side of making the cut?

*player has qualified for the German Masters

Of the players currently ranked within the world’s top 32, seven are currently set to miss out on qualification for Preston based on their prize money earned this season.

Of them, Chinese duo Liang Wenbo (33) and Zhou Yuelong (35) remain in close contention, albeit Zhou faces a more difficult task having failed to qualify for Berlin.

The highest ranked players set to miss out are defending champion Barry Hawkins (40) and Marco Fu (45) after both have struggled for results during the first half of the season, while 32nd placed Alan McManus (44) also finds himself more than £10,000 short of where he needs to be.

Finally, both Michael Holt (49) and Anthony Hamilton (90) are also set to miss out on Preston, with the latter likely needing a repeat of his unforgettable triumph in Berlin nearly a year ago to gatecrash the top 32.

Currently on course to qualify in their places however are some of the stars of the season so far, headed by 56th ranked Cao Yupeng (17) following his recent run to the final of the Scottish Open. Among the players who look certain to join him are fellow Chinese player Li Hang (18), the improving Jack Lisowski (19) and recent UK Championship quarter-finalist Mark Joyce (22).

Towards the lower end and still to make absolutely sure of their places are Jimmy Robertson (29), Robert Milkins (30) and Ben Woollaston (32).

While the field for the Shoot Out has not yet been publicised, of the two remaining tournaments counting towards World Grand Prix qualification it is the German Masters which carries the greater prize money, particularly during the latter rounds.

Of those potentially in the danger zone, Xiao Guodong (25), Ricky Walden (27), Graeme Dott (28), Jimmy Robertson (29) and Ben Woollaston (32) have successfully qualified for Germany, as have the two closest chasers Tom Ford (33) and Liang Wenbo (34).

Open to attack in Berlin though are Robert Milkins (31) and Stuart Bingham (30), the latter having made a strong start to the season prior to his recent suspension, which will keep him out of the German Masters, but end prior to the start of the Shoot Out, meaning that his fate does still remain in his own hands.

The Race to Preston resumes at the end of January with the start of the final stages of the 2018 German Masters on 31 January. 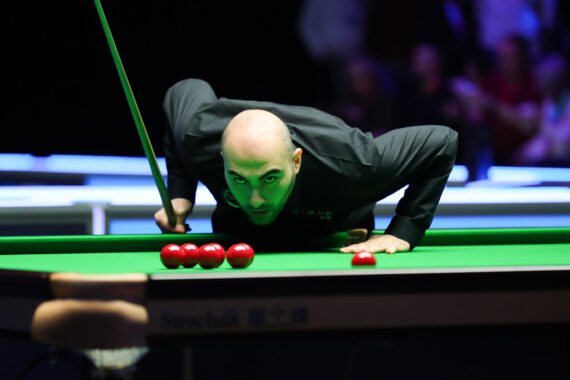 Maximum Joy For Prince Of Persia