Kyren Wilson ended a three-year wait to win his second ranking title by beating Peter Ebdon 4-2 in the final of the Paul Hunter Classic in Germany.

Kettering’s 26-year-old Wilson came from 2-0 down to take the last four frames of the final and claim the £20,000 top prize in Fürth. He moves up one place to eighth in the world rankings and books a place at the Champion of Champions event in November.

Wilson won his first ranking title at the 2015 Shanghai Masters and had several near misses in pursuit of his second. He lost ranking finals at the 2016 Indian Open, 2017 World Open and 2017 English Open, as well as the final of the Masters earlier this year, when he broke down in tears after defeat against Mark Allen.

But Wilson has now got his hands on another piece of silverware, having won seven matches over the weekend. In both the quarter and semi-finals he was a few balls away from defeat, but edged 4-3 wins over Daniel Wells and Peter Lines.

Ebdon, aiming to become the second oldest ever winner of a ranking event at the age of 47, took the first two frames of the final with a top break of 66. Wilson crucially took the third by potting the last pink and black, then made a 120 for 2-2. He got the better of a scrappy fifth frame , then made 68 and 57 in the sixth to cross the winning line.

Victory over Ebdon was poignant for Wilson as the pair first met 20 years ago at a charity pool event. After losing a frame against the six-year-old boy, former World Champion Ebdon suggested to Wilson’s parents that their son had a rare talent and should give snooker a try. The two have remained friends ever since.

Ebdon, playing in his first ranking final since 2012, missed the chance to win a tenth title. The £10,000 runner-up prize sees him climb five places up the rankings to 51st.

Wilson said: “It was always going to be a tough final against Peter. He’s a class act and I’d rather have played someone else in the final because usually I want him to win. But I’m chuffed to get the second ranking title on my CV. Your career is all based on what you have won, not how many finals you have been in. I’ve had a strong start to the season and I need to keep building.

“This tournament holds fond memories for me because it was the first overseas one I travelled to as a young kid. I’m delighted to get my name on the trophy.” 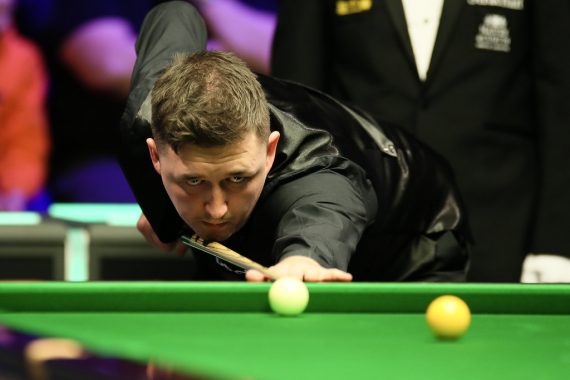