The World Professional Billiards and Snooker Association (WPBSA) is today excited to announce the launch of the WPBSA Q Tour from the start of the 2020/21 season.

Replacing the existing Challenge Tour, WPBSA Q Tour will provide a high-quality amateur circuit for players across the globe, offering direct access to the World Snooker Tour (WST) for elite talent with two main tour cards to be won.

Q Tour will see up to eight regular events held across the UK and mainland Europe each season, with the top ranked player at the end of the season automatically earning a two-year tour card. There will also be a play-off tournament run with 16 players, with the winner to also claim a place on the WST.

The series will carry a total prize fund of £100,000, with a minimum £12,000 to be won at each tournament. Both the overall winner of Q Tour and the final play-off winner will each earn a bonus of £2,000 upon joining the WST. 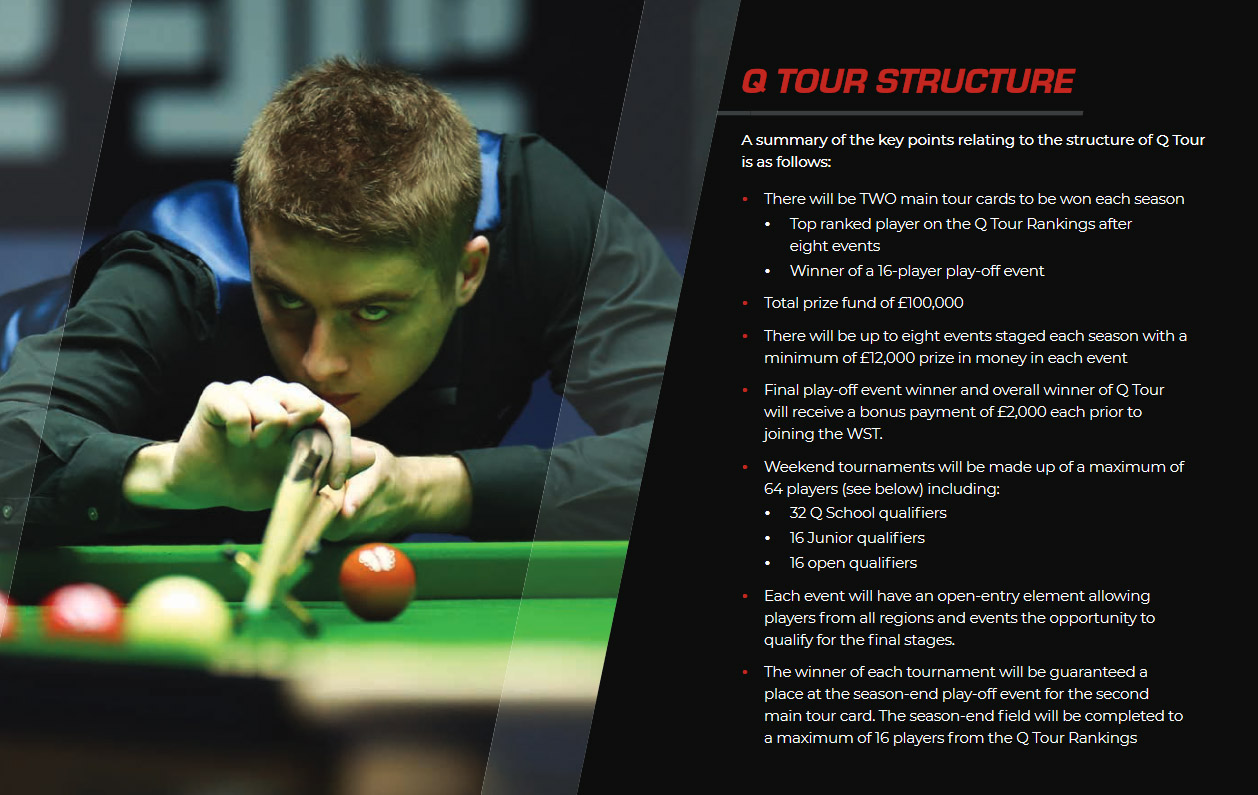 Each weekend tournament will be made up of 64 players, with priority places for the top 32 players from the 2020 Q School Ranking List not already qualified for the WST. Joining them will be 16 elite juniors selected by a WPBSA panel based upon results in national and international competitions such as the World Snooker Federation (WSF) events.

Tournaments will include an open entry element through the introduction of preliminary rounds held on the Friday immediately prior to the start of the weekend competition. Up to 16 players will qualify to complete the 64-player field. 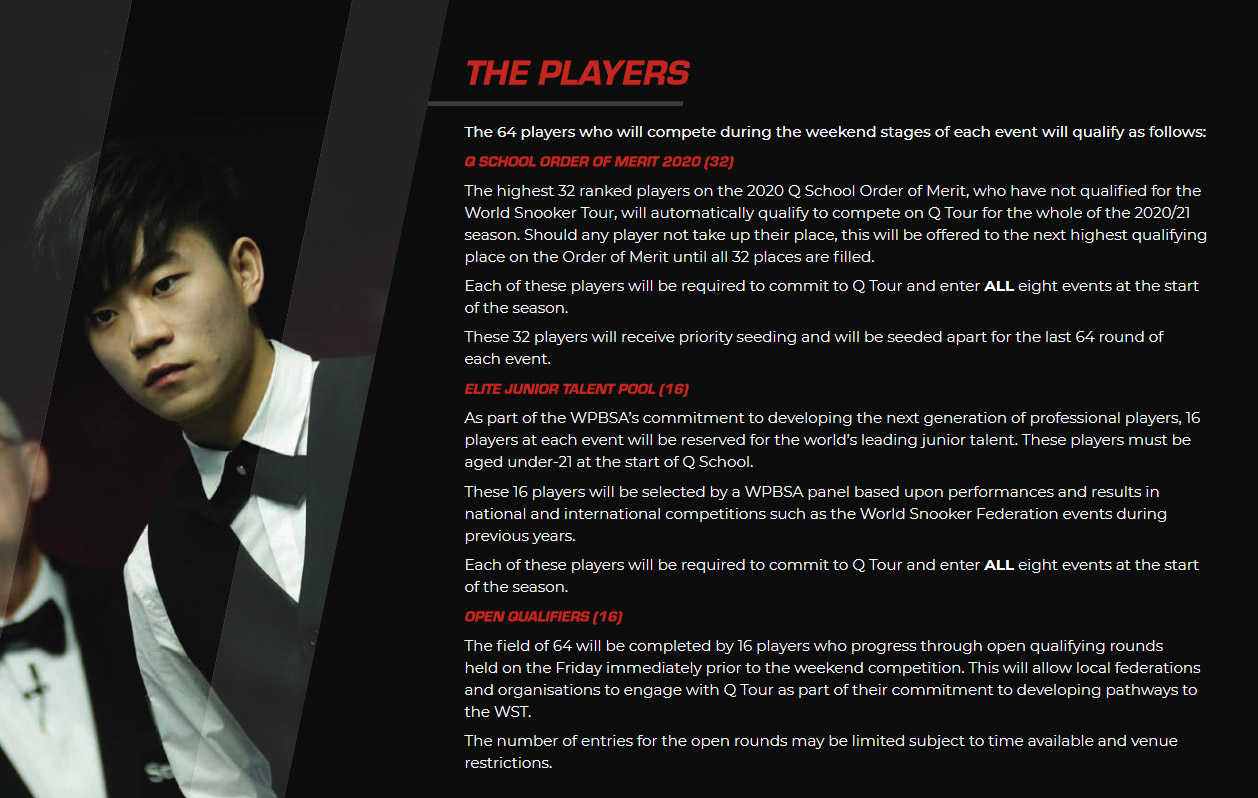 Q Tour represents the latest move by the WPBSA in the restructure of amateur snooker and will sit alongside WSF tournaments in providing a clear pathway for amateur players to turn professional.

The structure of the series has been devised following consultation with both amateur and professional players, WPBSA Player Directors and members of the Players Commission.

WPBSA Chairman Jason Ferguson said: “The launch of the new WPBSA Q Tour represents a significant step forward for amateur snooker and players everywhere who have ambition to join the prestigious WST.

“The introduction of a Challenge Tour by WST two years ago was well received by the WPBSA and it is important that we now develop this opportunity. Q Tour is now a clear pathway to a career in snooker for young talent, however we must also be mindful about producing high quality and very competitive environment for those who have perhaps been on tour a short while but have the will to battle for a second chance.

“History tells us that not all players make it first time on, Neil Robertson being another perfect example having re-qualified for the tour before going to become one of the all-time greats. More recently, England’s Ashley Hugill regained his WST place earlier this year following his victory at the WSF Open in Malta, having also won two Challenge Tour events. 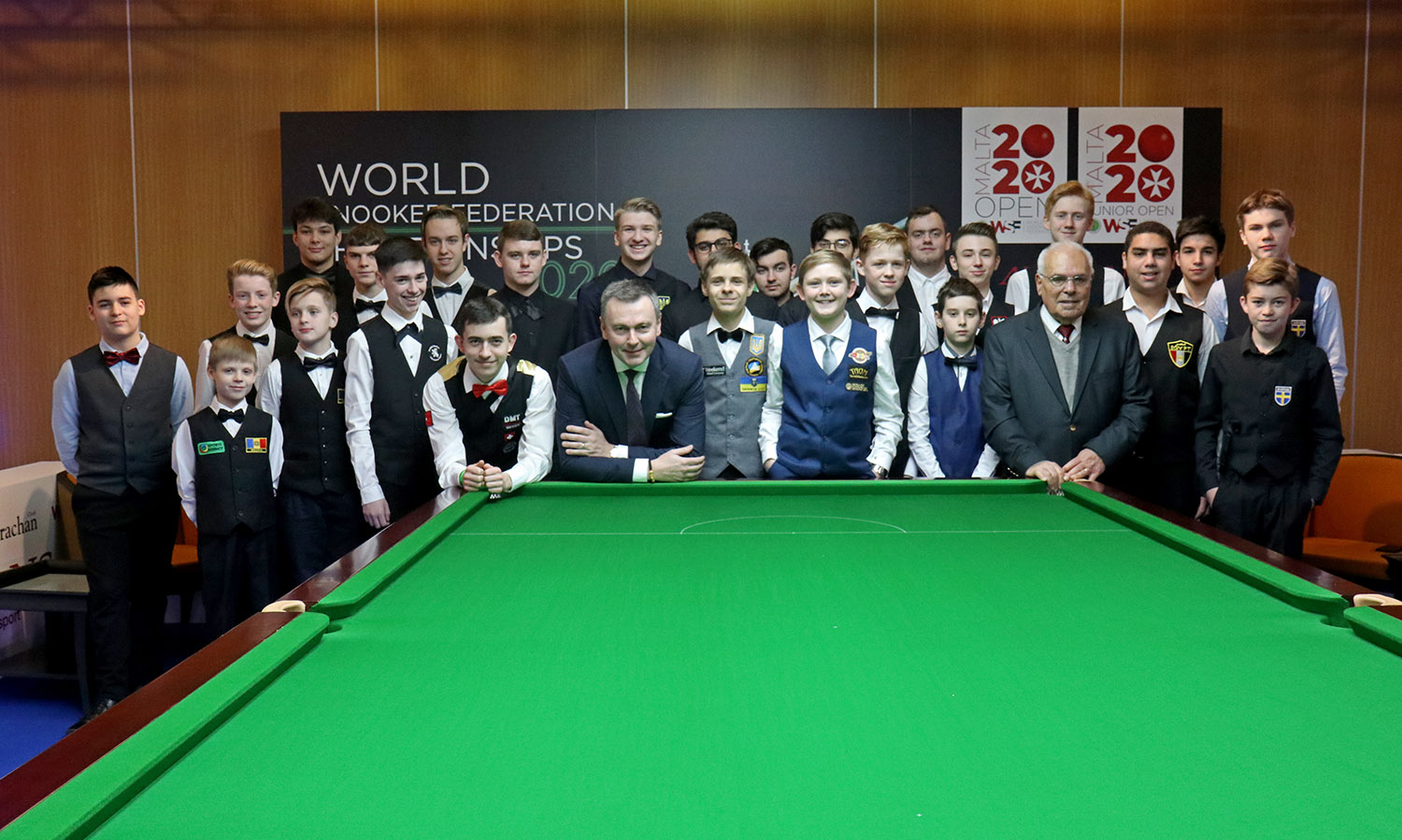 “WPBSA Q Tour is set to be the most competitive amateur tour around. It will be made up of those players with a track record, and on the edge of professional status, fighting it out against the most talented juniors in the world who are hungry for success.

“We have seen just how competitive junior snooker has become in events like the WSF Open events, where young players like Sean Maddocks, Iulian Boiko and Gao Yang all earned tour cards along with opportunities to play in the 2020 Betfred World Snooker Championship. These players represent our next generation of who we will one day see competing at the very highest level and it is crucial that we are able to provide them and others following in their footsteps with the opportunity to fulfil their potential.

“On behalf of the WPBSA board, I would like to thank all those who have contributed to the new WPBSA Q Tour structure, particularly our tour players, player directors, the Players Commission and the many amateurs who took time to express their opinions through the proper channels.”

Further information about Q Tour including tournament dates will be released in due course.