Stuart Bingham claimed the sixth ranking title of his career after a 4-1 victory against defending champion Ryan Day in the final of the Betway Gibraltar Open.

Bingham was in sublime form all weekend, firing in nine centuries on his way to the title. The 2015 World Champion was competing in his third ranking final of the season, having won the English Open earlier in the campaign and been runner-up at last month’s Welsh Open.

The victory, and the £25,000 top prize, also helped Bingham to secure his place at next week’s lucrative Tour Championship in Llandundo. The event plays host to the top eight players on the one-year money list. Bingham held off David Gilbert to claim his spot and will face Ronnie O’Sullivan in the opening round in North Wales.

Day’s valiant attempt to defend his title fell just short, but he leaves Gibraltar with a welcome £12,000, which boosts his chances of edging into the world’s top 16 and qualifying for next month’s World Championship. The Welshman finds himself in 17th position in the latest provisional seedings and will head to Beijing for the upcoming China Open hoping for a strong showing to clinch a Crucible spot.

This evening’s high quality encounter got off to a fast paced start as Bingham embarked on a 147 attempt in the opening frame. However, the 42-year-old broke down on 48 after missing a difficult red to the middle. Day punished him with a superb contribution of 83 to move 1-0 up.

The high scoring pattern continued as Bingham responded by composing breaks of 100 and 84, before a further run of 103 saw him move one from the win at 3-1. There was then an edgy fifth frame, which came down to the colours, as both players spurned opportunities. However, it was Bingham who eventually found a way to secure the frame and take home the title.

“I’m over the moon. I played well from the off, so it was great to keep it going all the way through the weekend,” said Bingham. “My main goal this week was to get into the Tour Championship. Once I got that, I relaxed a bit and had my eyes on the title.

“To get in the Tour Championship was something I looked at achieving at the start of the campaign. I knew I needed something special to qualify for the World Championship this season and now having qualified for next week, I am virtually into the Crucible as well.

“I have had my wife, my manager and his wife over this weekend and it has been great. That has made it special. I got a bit of sun burn yesterday so I was a slightly red in the shower. However, I topped the weekend off with a great win.” 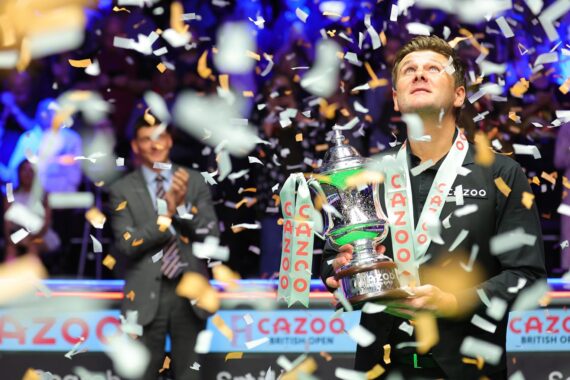