This week saw the return of ranking event snooker with the China Open qualifiers from Preston’s Guild Hall, as the majority of the tour played in their first counting event since the Scottish Open before Christmas. Below I take a look at some of the notable movements with an increasing emphasis on the tour survival race as we enter the ‘business end’ of the season.

As during previous seasons, a single qualifying round was played out, with only Judd Trump, Mark Selby, Ding Junhui and Liang Wenbo excused the trip up north, their matches held over to the venue. Also absent were Neil Robertson and Mark Allen, both not among the 128 names in the first round draw.

For the winners, a guaranteed £4,000 and a boost to their ranking, while the losers miss out on a trip to Beijing ahead of the World Championship in April.

In total there were defeats for 20 of the top 64 seeds in action, most notably with both losing Masters semi-finalists Marco Fu and Barry Hawkins exiting at the hands of Daniel Wells and Aditya Mehta respectively. For Wells, it is yet another excellent win for the 28-year-old Welshman currently enjoying the best season of his career and looking to break into the world’s top 64 for the first time, while Mehta continues to find form following his return to the circuit last year.

There was a rare qualifying defeat for Ryan Day to Scot Fraser Patrick, while Luca Brecel, Thepchaiya Un-Nooh and two-time champion Peter Ebdon were among the other casualties at the Guild Hall.

Otherwise, the likes of Stuart Bingham, John Higgins, Shaun Murphy and Ronnie O’Sullivan were among those to make it through, not without a scare in Bingham’s case however, Thai veteran James Wattana taking him all the way to a decider.

With time running out before the all-important World Championship qualifiers at Ponds Forge in April, there were also a number of key results further down the rankings in the ongoing battle for tour survival.

In fact, it was a week that saw a number of defeats for players currently just inside of the top 64 on the official list, but in deeper trouble on the arguably more important provisional lists running that will ultimately determine their fate.

Former world champion Ken Doherty fell 5-3 to Allan Taylor as he continued a grim run of form which has seen him win just five matches so far this season and lose his last five without making a break of 50 or above. In serious danger of dropping off the tour as outlined in my previous Tour Survival article, he now likely has just four events from which to arrest his slide and retain his place.

Also not making it to China were Joe Swail, Robin Hull, Rod Lawler and Dechawat Poomjaeng, like Doherty all players ranked of the world’s top 64 but at real risk of dropping out between now and the end of the season.

On the flip side, there were however important victories for Ross Muir and Noppon Saengkham, against Dominic Dale and Tom Ford respectively, as they closed the gap to the top 64, while the likes of Gary Wilson, Li Hang and Alfie Burden were among those to add £4,000 to their tallies and ease the pressure as we approach the home straight of the 2016/17 season.

And on the one-year list there were also key victories for players further down the official ranking list, not least the ever-popular Jimmy White who continued his strong form of late to progress to the venue with a 5-4 victory against Sam Baird. With £18,000 now to his name this season, he lies in fourth position on the one-year ranking list of players outside of the 64 and in the midst of arguably his strongest run of form during the decade, now has his fate very much in his own hands.

Others to make progress on the one-year list include Rhys Clark, Hossein Vafaei and the already mentioned Muir and Saengkham, with £16,500 currently the minimum amount required from the season to stand in line for one of the eight available tour cards.

The venue stages of the China Open take place in Beijing on 27 March – 2 April 2017 and will be the final opportunity for players to earn prize money ahead of the crucial seedings revision ahead of this year’s World Championship in Sheffield. 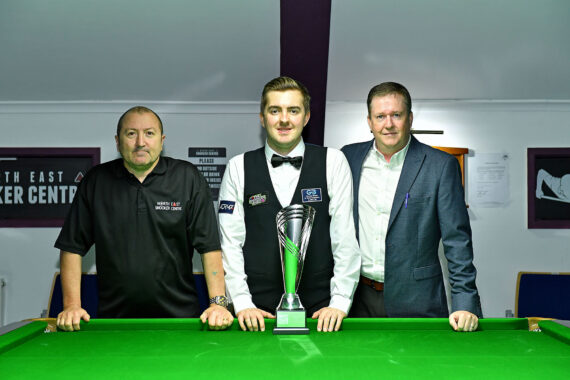