Sheffield is the centre of attention for the snooker world over the coming weeks, but before the final stages of the Betfred World Professional Championship take place, the iconic Crucible Theatre will play host to the 2019 ROKiT Sheffield Masters on Thursday – the latest leg of this season’s World Seniors circuit.

71-year-old Cliff Thorburn goes into the event as the defending champion. Twelve months ago, at the same venue where he became the first overseas world champion of the modern era, the Canadian dramatically defeated qualifier Jonathan Bagley on a re-spotted black in the final.

Looking to retain the title, top seed Thorburn faces a stern examination in his opening match when he meets ‘Crucible King’ seven-times world champion Stephen Hendry, who is still looking for his maiden title at seniors level.

Elsewhere in the top half, current UK Seniors champion Ken Doherty will be looking to draw upon past glories in Sheffield too. First up for the Irishman is qualifying event winner and former professional Barry Pinches; no stranger to the intimate environment himself.

It has been over a decade since the last time that Jimmy White played a competitive match at the Crucible – a venue that harbours both sweet and difficult memories for him. The ever-popular Londoner is aiming for a hat-trick of successive titles on the seniors scene following victories at the Seniors Irish Masters and the Seniors World 6-Red Championship in recent months. Number three seed White crosses cues with 1986 World Champion Joe Johnson in the first round.

Reigning World Seniors champion Aaron Canavan will fulfil a lifelong ambition when he makes his Crucible Theatre debut. The Jersey based cueman – runner-up to White at the 6-Reds last month in Belfast – plays the returning John Parrott, one of five former world professional champions in the eight-man draw.

The one-day extravaganza will be contested across two sessions and is being covered live by FreeSports TV with action beginning at 2:00pm. All matches are the best of three frames, although if the score is tied at 1-1, the outcome will be decided by the now customary black ball tie-breaker. The 2019 ROKiT Sheffield Masters champion will bank a £7,500 winners’ purse.

Full information about the tournament including results, draw and schedule is available to view using the new WPBSA Tournament Manager HERE. 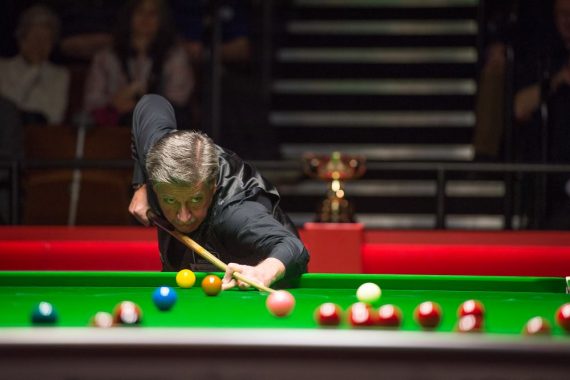 End Of The Road For Thorburn